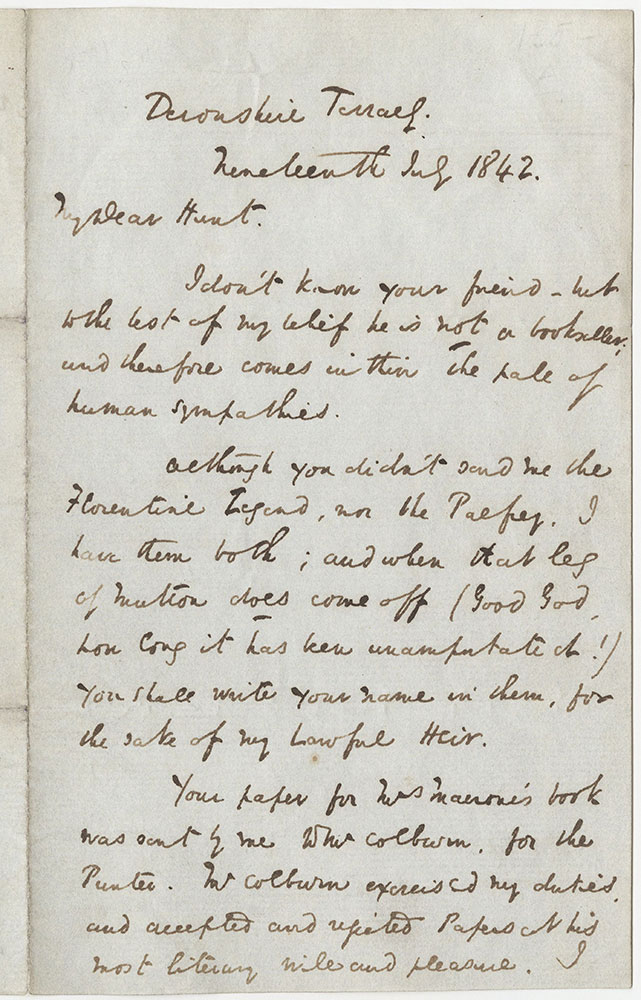 My Dear Hunt.
I don't know your friend - but to the best of my belief he is not a bookseller; and therefore comes within the pale of human sympathies.
Although you didn't send me the Florentine Legend, nor the Palfrey, I have them both; and when that leg of Mutton does come off (Good God, how long it has been unamputated!) you shall write your name in them, for the sake of my Lawful Heir.
Your paper for Mrs. Macrone's book was sent by me to Mr. Colburn, for the Printer. Mr. Colburn exercised my duties, and accepted and rejected Papers at his most literary will and pleasure. I resisted this monstrous indecency in Mr. Colburn for a whole year; and then wrote him that as it was a work of charity, and I wanted his money for Mrs. Macrone, I would give him his own way - which; if it were my own case, and I wanted bread, I would never do. I damned his eyes (by implication and construction) at the same time; and declined to hold any further correspondence with him, on any subject.
But if you wish me to apply to him, or any of his Myrmidons, for this particular paper, I will do so. We fell out about a paper of Landor's, which he said "his literary friend had told him wasnt Protestant" ! ! ! ! ! ! ! ! ! !
Faithfully Yours always
Charles Dickens
Leigh Hunt Esquire 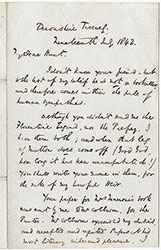 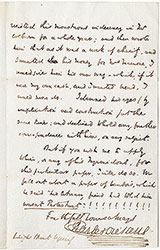