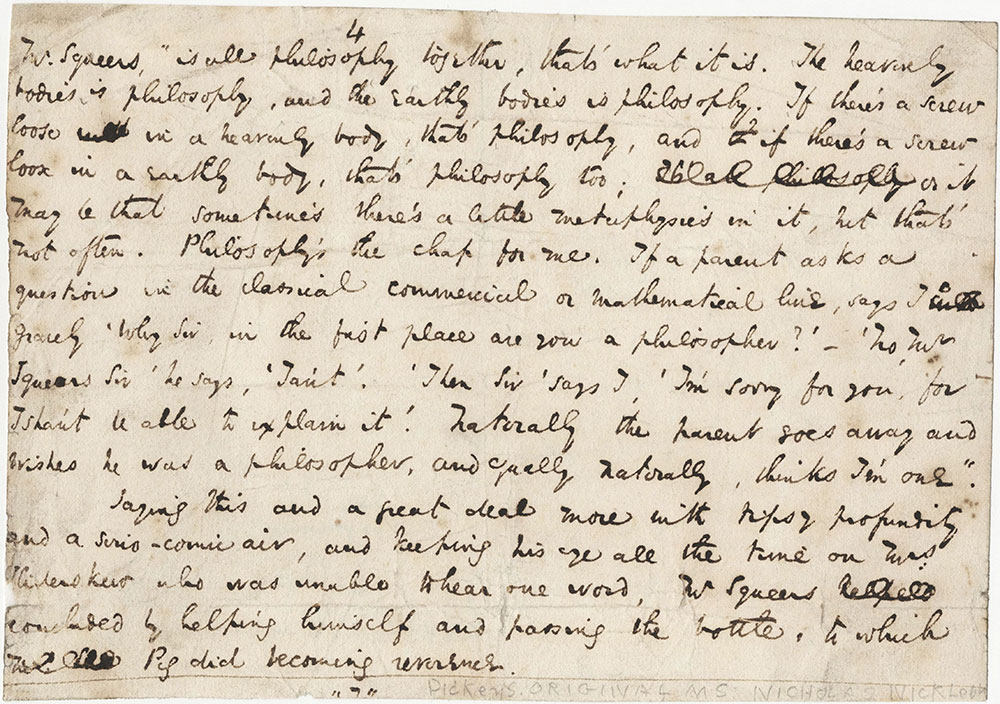 4
[...]Mr Squeers, "is all philosophy together that's what it is. The heavenly bodies is philosophy, and the earthly bodies is philosophy. If there's a screw loose (word crossed out) in a heavenly body that's philosophy, and if there's a screw loose in a earthly body that's philosophy too; (words crossed out) or it may be that sometimes there's a little metaphysics in it, but that's not often Philosophy's the chap for me. If a parent asks a question in the classical commercial or mathematical line, says I (word crossed out) gravely 'Why sir in the first place are you now a philosopher?' - 'No, Mr Squeers Sir' he says. 'I an't'. 'Then sir' says I, 'I'm sorry for you, for I shan t be able to explain it'. Naturally the parent goes away and wishes he was a philosopher and equally naturally thinks I'm one".
Saying this and a great deal more with tipsy profundity and a serio-comic air, and keeping his eye all the time on Mrs Sliderskew who was unable to hear one word, Mr Squeers (word crossed out) concluded by helping himself and passing the bottle to which Peg did becoming reverence.

Charles Dickens. The Life and Adventures of Nicholas Nickleby, Containing a Faithful Account of the Fortunes, Misfortunes, Uprisings, Downfallings and Complete Career of the Nickleby Family, edited by Boz. London: Chapman and Hall, November 1837 - October 1839. 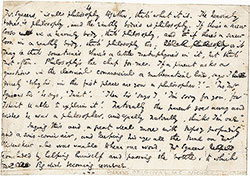