Chronicle of the History of the World from Creation to Woden, with a Genealogy of Edward IV 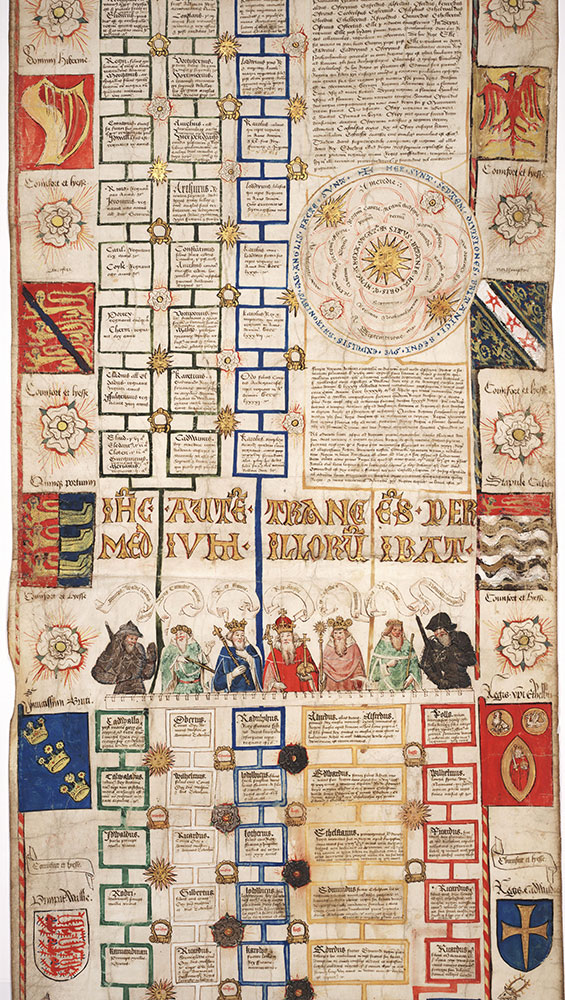 Item No: mca2010004
Title: Chronicle of the History of the World from Creation to Woden, with a Genealogy of Edward IV
Script: Secretary
NickName: Edward IV Roll
Language: Latin
Folio Number: section 4
Source: Rare Book Department
Notes: Fourth section showing a frieze with the royal ancestors of Edward IV
Notes: This image shows a section of a genealogical roll that was commissioned to celebrate the English king Edward IV's (1442-1483) accession to the throne after he deposed Henry VI. By placing his ancestry within the framework of world history as it was understood at the time, Edward IV could claim hereditary and God-given rights to the throne of England. Edward's motto, 'confort et lyesse', and his badge, the rose-en-soleil, alternate with coats of arms placed along the edges of the roll that illustrate Edward's ties to the royal and aristocratic families of England. In this section, seven half-portraits of the Prince of Wales, the Duke of Cornwall, the King of France, the King of England, the King of Castile, the Duke of Aquitane, and the Duke of Normandy represent the seven ancient lines of Edward's descent.
Notes: This manuscript was executed sometime between June 1461 (Edward IV's coronation) and May 1464 (his marriage), probably ca. 1461.
Sirsi Catalog Key: 1531619
Country: Country:England 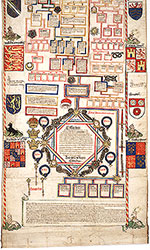 (1475). Chronicle of the History of the World from Creation to Woden, with a Genealogy of Edward IV. Retrieved from https://libwww.freelibrary.org/digital/item/3313

Chronicle of the History of the World from Creation to Woden, with a Genealogy of Edward IV. 1475. Free Library of Philadelphia: Philadelphia, PA. https://libwww.freelibrary.org/digital/item/3313. (accessed Jan 29, 2023)