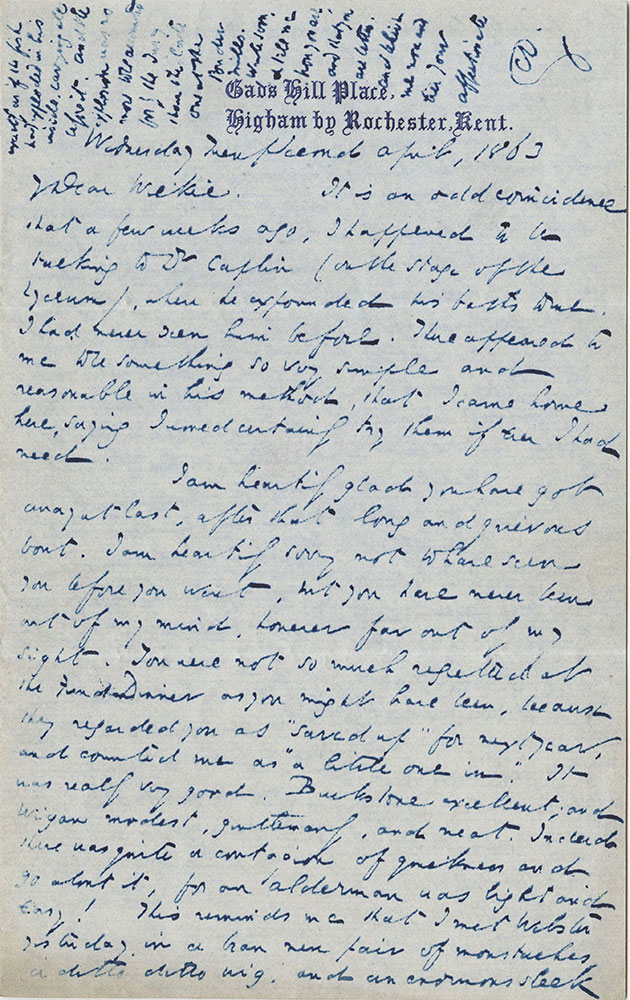 My Dear Wilkie. It is an odd coincidence that a few weeks ago, I happened to be talking to Dr. Caplin (on the stage of the Lyceum) when he expounded his baths to me. I had never seen him before. There appeared to me to be something so very simple and reasonable in his method, that I came home here, saying I would certainly try them if I had need.

I am heartily glad you have got away at last, after that long and grievous bout. I am heartily sorry not to have seen you before you went, but you have never been out of my mind, however far out of my sight. You were not so much regretted at the Fund Dinner as you might have been, because they regarded you as “saved up” for next year, and counted me as “a little one in.” It was really very good. Buckstone excellent; and Wigan modest, gentlemanly, and near. Indeed there was quite a contagion of quickness and go about it, for an Alderman was bright and easy! This reminds me that I met Webster yesterday, in a bran new pair of moustaches a ditto ditto wig, and an enormous sleek hat. He really looked young, except that he was shaking from head to foot—which I attributed to the strong demands made upon his mature vigour by Miss Avonia Jones. (I need not remark upon its being a theatrical joke to call her Ammonia). I saw him go into Rule’s and screw himself up with Oysters: which I thought discreet. He is doing but ill. Meantime that wretched Mr. Falconer is at the end of his tether at Drury Lane—which he closes this week—and goes about in a state of delirium tremens, grasping at imaginary spectres, pots of porter, or glasses of brandy and water. It is not known which. I write this on Gad’s Hill paper, as you see, but at the Office. The neighbourhood is immensely excited. The St. Giles’s Murderer is taken, and yelling virtue (mostly drunk) is waiting in a crowd in Bow Street to rend him. This mention of the neighbourhood brings me round to the Office. Reade is rather dropping us. Consequently I strike in next week with a new series of the Uncommercial. The Drop is very small, but I want to stop it.

Ah, poor Egg! I knew what you would think and feel about it. When I saw him in Paris on his way out, I was struck by his extreme nervousness, and derived from it an uneasy foreboding of his state. What a large piece of a good many years he seems to have taken with him! How often have I thought, since the news of his Death came, of his putting his part in the Saucepan (with the cover on) when we rehearsed the Lighthouse—of his falling out of the hammock when we rehearsed The Frozen Deep—of his learning Italian numbers when he ate the garlic in the carriage—of the thousands (I was going to say) of dark mornings when I apostrophized him as “’Kernel”—of his losing my invaluable knife in that beastly stage coach—of his posting up that mysterious book every night! I hardly know why, but I have always associated that volume, most, with Venice. In my memory of the dear gentle little fellow, he will be (as since those days he always has been) eternally posting up that book at the large table in the middle of our Venice sitting-room—incidentally asking the name of an Hotel three weeks back! And his pretty house is to be laid waste and sold!? If there be a sale on the spot, I shall try to buy something in loving remembrance of him, good dear little fellow. Think what a great Frozen Deep lay close under those boards we acted on! my brother Alfred, Luard, Arthur, Albert, Austin, Egg—even among the audience, Prince Albert and poor Stone—all gone! “I heard the”—I forget what it was, I used to say—“come up from the Great Deep;” ad it rings in my ears now, like a sort of mad prophecy.

However, this won’t do. We must close up the ranks and march on.

Howitt has gone mad (madder, I mean) about an article I wrote on his Spirit book, and sends me a printed advertisement of it with notices appended “with Mr. Howitt’s compliments to Mr. Dickens, and many thanks for the impulse given to his work by All the Year Round, and the other Infidel Journals.” With the terrors of the Libel Law before my eyes, I charged Mr. Home, in another article, with one of his swindles at Florence. But he has made no sign. The stupendous absurdity of Howitt’s book is inconceivable. Home’s is clearly (to me) the book of a scoundrel without shame.

I hope and trust you will come to Gad’s this summer. I cannot regard myself as having a home anywhere, but the place gets so pretty, that I can’t help being fond of it, and I am always touching it up with something new. I read last night, and we had an immense audience, and turned away great numbers. The management of Block is so mortal bad, that I am going in all good humour, to get rid of him at the end of this series. But I rather hope he may be murdered before it is over. I saw so many doubled fists flourished in his perspiring face last night, that i trust his life may be considered in danger.

Old Bicknell’s pictures are going to be sold at Christie’s. Whereof Davy Roberts did so prose to me as I was dining at the Athenaeum last Monday (looking out complacently, meanwhile, at the Senior United Service, with a big blue upper lip just wrenching itself into a prosperous Consolidated New 3 per cent smile while he rattled shillings in both is trousers pockets, with his hat dropping over his left eye), that I answered at random, and was quite imbecile. They cost ₤20,000 and a dealer has offered ₤55,000. That’s a way to be a patron of art Sir!

Forster, on his birthday, fell into an epileptic fit of indignation against Knox the Magistrate: whom he called “a talking Potato.” He went off, over a salmon, exactly as if the fish had exploded in his inside, carrying all before it. And the explosion was no more to be accounted for by the Jury than the late one at the Powder Mills. Write soon, & tell me how you are, and that you are better. And believe me now and ever Your affectionate 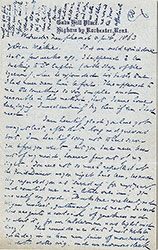 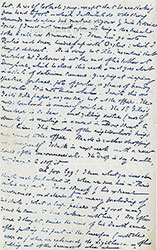 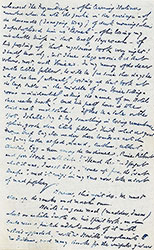 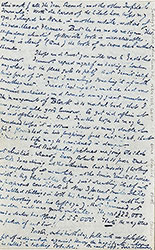