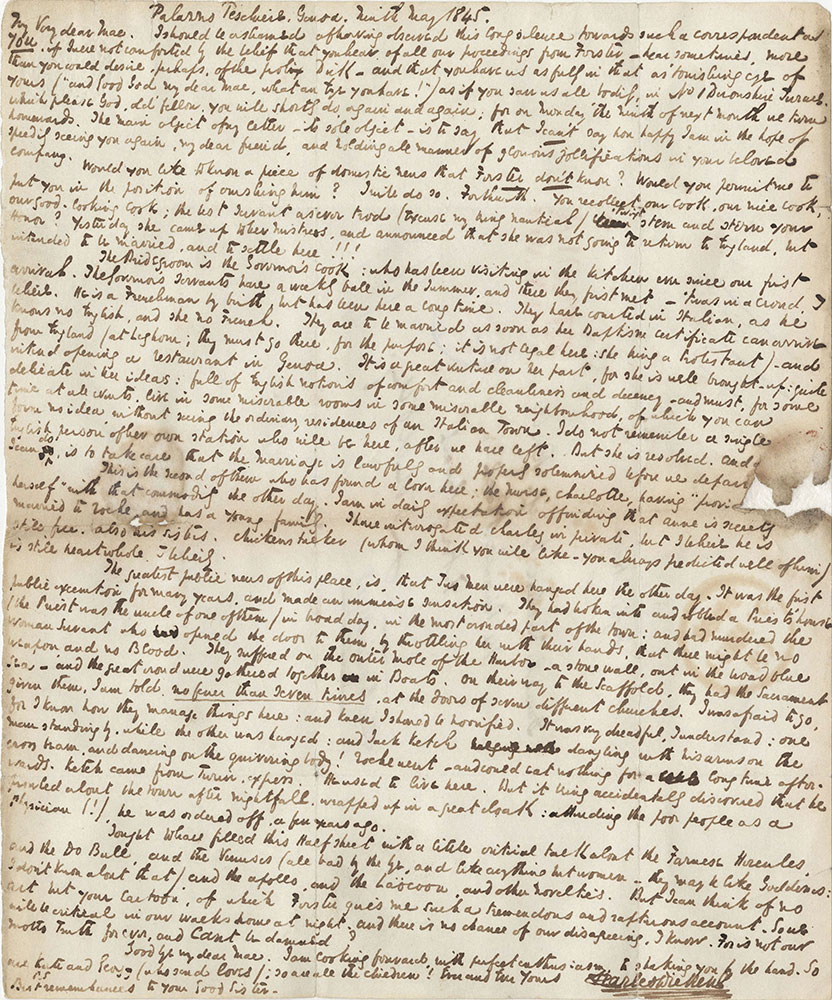 My Very Dear Mac. I should be ashamed of having observed this long silence towards such a correspondent as you, if I were not comforted by the belief that you hear of all our proceedings from Forster - hear, sometimes, more than you could desire, perhaps, of the prolix Dick - and that you have us as fully in that astonishing eye of yours ("and Good God, my dear Mac, what an Eye you have!")as if you saw us all bodily, in No. 1 Devonshire Terrace, which please God, old fellow, you will shortly do, again and again; for on Monday, the Ninth of next month we turn homewards. The main object of my letter - its sole object - is to say that I can't say how happy I am in the hope of speedily seeing you again, my dear friend, and holding all manner of glorious jollifications in you beloved company.
Would you like to know a piece of domestic news that Forster don't know? Would you permit me to put you in the position of crushing him? I will do so. Forthwith. You recollect our Cook, our nice Cook, our good-looking Cook; the best Servant as ever trod (excuse my being nautical) twixt stem and stern your Honor? Yesterday she came up to her Mistress, and announced that was not going to return to England, but intended to be married, and to settle here ! ! !
The Bridegroom is the Governor's Cook: who has been visiting in the kitchen ever since our first arrival. The Governor's servants have a weekly ball in the Summer, and there they first met - 'twas in a Crowd, I believe. He is a Frenchman by birth, but has been here a long time. They have courted in Italian, as he knows no English, and she no French. They are to be married as soon as her Baptism Certificate can arrive from England (at Leghorn; they must go there, for the purpose; it is not legal here: she being a Protestant) - and intend opening a Restaurant in Genoa. It is a great venture on her part, for she is well brought-up: quite delicate in her ideas: full of English notions of comfort and cleanliness and decency - and must, for some time at all events, live in some miserable rooms in some miserable neighborhood, of which you can form no idea, without seeing the ordinary residences of an Italian Town. I do not remember a single English person of her own station who will be here, after we have left. But she is resolved. And {all} I can do, is to take care that the Marriage is lawfully and properly solemnized before we depart.
This is the second of them who has found a lover here; the Nurse, Charlotte, having "provi[ded] herself" with that commodity the other day. I am in daily expectation of finding that Anne is secretly married to Roche and has a young family. I have interrogated Charley in private, but I believe his is still free, also his sisters. Chickenstalker (whom I think you will like - you always predicted well of him) is still heartwhole, I believe.
The greatest public new of this place, is, that Two Men were hanged here the other day. It was the first public execution for many years, and made an immense sensation. They had broken into and robbed a Priest's house (the Priest was the uncle of one of them) in broad day, in the most crowded part of the town: and had murdered the Woman Servant who had opened the door to them, by throttling her with their hands, that there might be no Weapon, and no Blood. They suffered on the Outer Mole of the Harbor - a stone wall, out in the broad blue sea - and the great crowd were gathered in Boats. On their way to the Scaffold, they had the Sacrament given them, I am told, no fewer than Seven times, at the doors of seven differenct Churches. I was afraid to go, for I know how they manage things here: and knew I should be horrified. It was very dreadful, I understand: one man standing by, while the other was hanged: and Jack Ketch dangling with his arms on the cross beam, and dancing on the quivering body! Roche went - and could eat nothing for a long time afterwards. Ketch came from Turin, express. He used to live here. But it being accidentally discovered that he prowled about the town after nightfall, wrapped up in a great cloak, attending the poor people as a Physician (!), he was ordered off, a few years ago.
I ought to have filled this Half sheet with a little critical talk about the Farnese Hercules, and the Do. Bull, but the Venuses (all bad by the bye, and like anything but women - they may be like Goddesses: I don't know about that), and the Appolo, and Laocoon, and other Novelties. But I can think of no Art but your Cartoon, of which Forster gives me such a tremendous and rapturous account. So we will be critical in our walks home at night. And there is no chance of our disagreeing, I know. For is not our motto Truth for ever, and cant be damned?
Goodbye my dear Mac. I am looking forward, with perfect enthusiasm, to shaking you by the hand. So are Kate and Georgy (who send loves); so are all the children! Ever and Ever Yours
Charles Dickens
P.S. Best remembrances to your Good Sister. 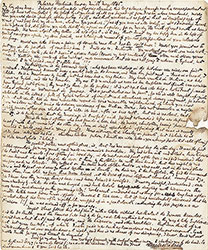 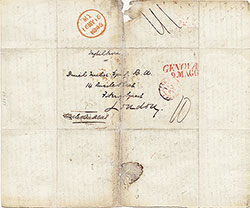