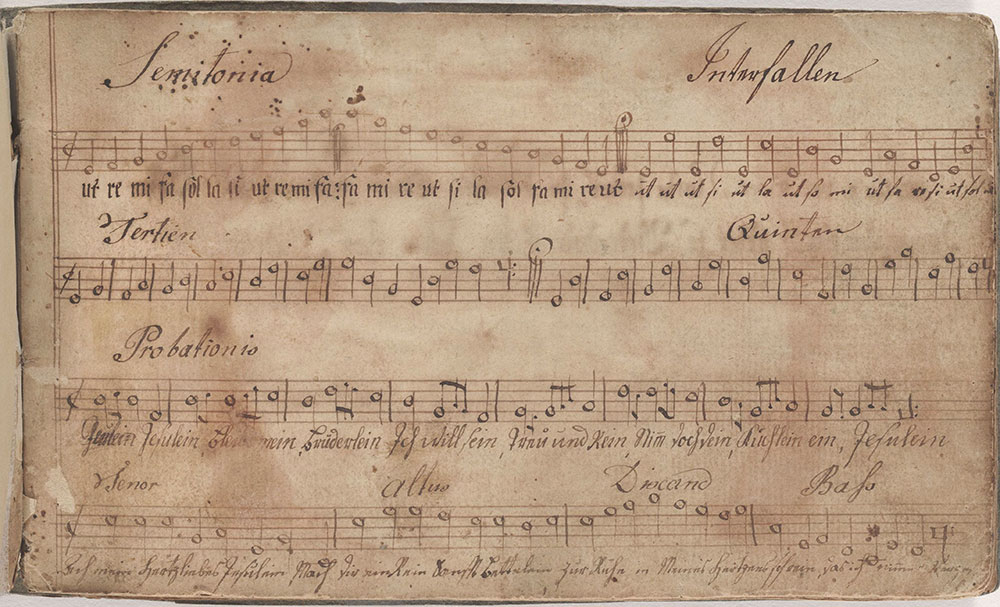 Semitones are given in solfeggio, a technique that assigns the notes of a scale a particular syllable, i.e ut= c, re=d, mi=e, fa=f, sol=g, la=a, si=b. Using these syllables to practice different note sequences enables the musician to hear the pitch, and to sight sing the music.

Thirds encountered between an octave are given along with the perfect fourth and major second.

Perfect Fifths are given ascending and descending the scale, along with major sixth, minor third, and perfect fourth.

A Test shows how to fill in grace and ornamental notes between unison, seconds, thirds, and fourth notes. Beneath these notes is a children’s verse “Little Jesus be my brother. I want to remain faithful and pure. Shelter your little chick, O tiny Jesus.”

The Tenor, Alto, Discant (Soprano), and Bass clefs are identified.

A clef is a musical symbol used to indicate the name and pitch of written notes. The use of different clefs for different instruments and voices allows each part to be written comfortably on the stave with a minimum of ledger lines.

Beneath the clefs is the thirteenth verse from Martin Luther’s children’s Christmas song of the little child Jesus (Vom Himmel hoch da komm ich her taken from the second chapter of Luke. It was written about 1535 most likely for his little son Hans: “ My most beloved little Jesus, make a pure and soft tiny bed to rest within the chambers of my heart, so that I may never forget You.”

Johann Adam Eyer (1755-1837) was active from 1779-1820 as a schoolmaster and Fraktur artist. He was also a musician. Eyer rewarded his students with beautifully decorated certificates of merit, created writing sample copy books, and introduced what is thought to be the first decorated tune booklets, for use by his students. He taught principally in Bucks, Chester, Lancaster, Northampton, and Monroe Counties (Pennsylvania).

Elisabeth Lädtermann is listed in Johann Adam Eyer’s roll book for the 1783 winter quarter from 15 December 1783 to 15 March 1784. She’s not listed as a student before this. However, some of the prior pages are missing. Since Eyer made this tune booklet for her April 29, 1783, it is more than likely that she is listed on those pages no longer extant. The Fraktur title page is on page 1, followed by 79 tunes, taken from the Marburg hymnal.

The idea of creating such a booklet to teach children the rudiments of musical notation so that they could learn to sing the melodies used in the hymns at church service seems to have been Eyer’s. The hymnals used by their parents contained no music, but only the hymn verses with the indication “Mel.” and the title of the hymn tune to which the congregation would sing the text. The metrics, and topic of the poetry usually determined which melodies were chosen. 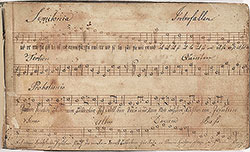