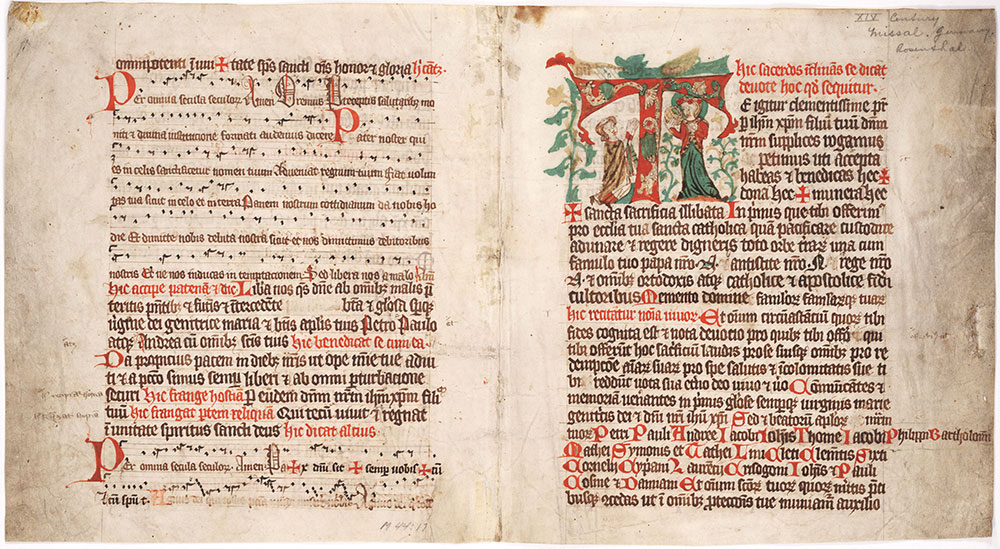 Item No: mcai440171
Additional Title: Missal
Script: Gothic bookhand
Language: Latin
Folio Number: front
Source: Rare Book Department
Notes: Initial T with a Priest praying to St. Dorothea of Caesarea
Notes: This bifolium contains the first part of the Canon of the Mass. This side of the bifolium contains the beginning of the Canon, starting with the initial T of "Te igitur" (You therefore [most merciful father]. The opposite side of the opening contains the text and chant for the Lord's Prayer.

The iconography traditionally associated with the Canon of the Mass is the Crucifixion, which is only suggested here in the form of the T as a reference to the Tau, or T-shaped Cross. In place of St. John and the Virgin, who normally flank the Cross, is a priest praying to St. Dorothea of Caesarea, a fourth-century virgin martyr. The variation indicates that this missal was intended for use in a church dedicated to this saint.
Notes: This cutting can be dated to ca. 1325.
Sirsi Catalog Key: 1647082
Country: Country:Germany