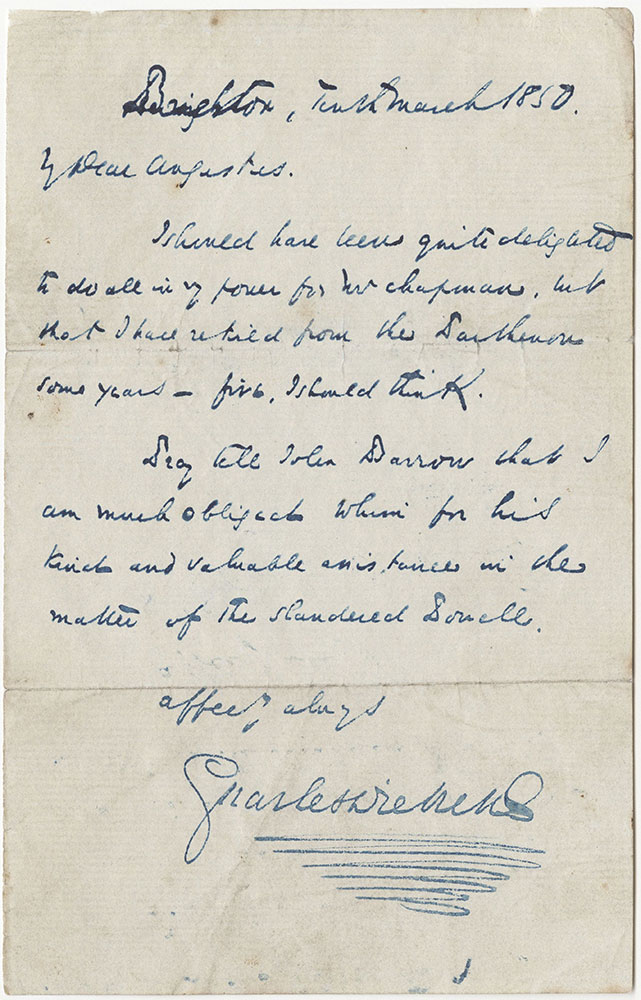 I should have been quite delighted to do all in my power for Mr. Chapman, but that I have retired from the Parthenon some years –five, I should think.
Pray tell John Barrow that I am much obliged to him for his kind and valuable assistance in the matter of the slandered Powell.

Thomas Powell (eventually revealed as an embezzler and forger) was, according to Dickens biographer Edgar Johnson, originally introduced to Charles Dickens by the latter’s ne’er-do-well brother Augustus.  Powell and Augustus Dickens were fellow clerks in the office of Thomas Chapman, a friend of Charles Dickens.  Through Augustus, Powell ingratiated himself into the Dickens household, and dined several times with Charles Dickens at the Dickens home, Devonshire Terrace.  Later, it was revealed that through a series of forgeries, Powell had defrauded his employer Chapman out of 10,000 pounds!  Charles Dickens was informed of this theft in a letter from Thomas Chapman.  However, Chapman took pity on Powell for the sake of the latter’s family, and forgave his crime.  Subsequently, Powell passed forged checks defrauding various tradesmen.  He was brought before a magistrate, but escaped prosecution by having himself certified insane and committed to a lunatic asylum, where he was treated by Dr. Southwood Smith.  He thereafter fled to New York where he escaped prosecution for another forgery.  Powell passed himself off as a literary man who had mingled with many celebrities in London, and published a sketch of Dickens in “The Evening Post.”  Hearing of the sketch, Dickens branded it “A complete and libelous lie.”  Dickens wrote to New York publisher William Gaylord Clark, giving the latter a full account of Powell’s career.  Dickens’s letter was published in the “New York Tribune.”  Powell then sued Dickens for 10,000 pounds.  In retaliation, Dickens gathered together all of the evidence of Powell’s misdeeds, and in 1849 had Bradbury and Evans print these in a four-page pamphlet, which Dickens forwarded to Charles Kent, editor of “The Sun.”  Eckel terms this pamphlet the “Leaflet on Thomas Powell,” and says that there is only one known copy of it.  Eckel further states that Powell cultivated the acquaintance of various well-known writers, including Leigh Hunt.  Robert Browning corrected the proof sheets of a collection of verse published by Powell.  According to Eckel, Browning later regretted his acquaintance with Powell, and wrote to a friend, “None of your Powells inspecting my Bowels.”  According to Eckel, Powell was also acquainted with Tennyson and Wordsworth.
http://www.charlesdickensonline.com/Gallery/g322.htm 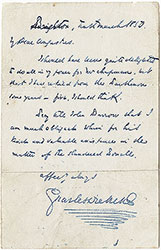