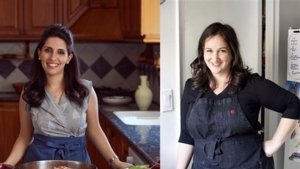 In conversation with Deb Perelman

Reem Kassis is the author of The Palestinian Table, a guide to Middle Eastern cooking woven together through recipes, regional history, and three generations of family traditions. Praised by fellow Philadelphian Michael Solomonov as “an incredible cookbook,” The Palestinian Table won the 2018 Guild of Food Writers First Book Award and was nominated for a James Beard Foundation Cookbook Award. Born and raised in Jerusalem, Kassis is a graduate of the Wharton School and a former business consultant, and has contributed to periodicals such as the Washington Post and the Los Angeles Times. In The Arabesque Table, she returns with a collection of recipes that celebrates Arab cuisine’s diverse history and dynamic present.

Deb Perelman is the creator of the long-running Smitten Kitchen blog, a no-fuss cooking resource that has spawned legions of followers and two bestselling cookbooks. She has also appeared in Martha Stewart Living, Parenting, and NPR, among other places.

Signed books will be available through the Joseph Fox Bookshop