During this fall season of Free Library Author Events, we’re seeing a lot of cultural connections between our authors and speakers.

Let’s talk about the events taking place two days in a row, both off-site at the same location (the Irvine Auditorium at the University of Pennsylvania), and both featuring writers that exist in a class of their own.

First up, Ta-Nehisi Coates will return on Wednesday, September 25 to discuss his first novel of fiction, The Water Dancer. He’s been here twice before, first in 2015 with Between the World and Me, then again in 2017 with We Were Eight Years in Power. To date, these were a few of our most popular talks. Renowned as a brilliant writer, an insightful thinker, and a powerful orator, his recent testimony in front of the U.S. House of Representatives about reparations for slavery made headlines around the world.

Then on Thursday, September 26 we’re hosting Malcolm Gladwell. The author of Outliers, David and Goliath, The Tipping Point, and several other books, he is also the host of the wildly popular Revisionist History podcast. Here he is with Stephen Colbert a few years back explaining his passion for, well, explaining things to people.

In his latest book, Talking to Strangers, Gladwell unpacks the ways in which our interactions with those who are unknown to us go so very wrong, while offering strategies and tools to make sense of the unfamiliar.

We’re also hosting two authors this season who write about the ties that bind communities, families, and cultures.

Joy Harjo is the 23rd United States Poet Laureate, the first Native American honored with this position. She’s the author of 16 poetry collections, two children’s books, and an award-winning memoir. She'll join us on Wednesday, November 13 to discuss her latest collection of poems, An American Sunrise. Here she discusses her work and the power of poetry.

Harjo is also an internationally renowned saxophonist who has released five critically acclaimed albums. Here she performs some of her poetry and music.

Bearing witness to the complexities of Haitian life in stories of courage, brutality, family, and rebellion. Edwidge Danticat is the author of Create Dangerously: The Immigrant Artist at Work; the National Book Award finalist Krik? Krak!; and Brother, I’m Dying, winner of the National Book Critics Circle Award. The MacArthur Fellowship recipient and Pushcart Prize winner will visit us on Thursday, September 19 to discuss her latest story collection about Haiti, Everything Inside, explores the tidal forces of community that ebb and flow within us all. Here she discusses her novel Claire of the Sea Light back in 2013.

Next up, we’re featuring two authors with a unique connection: both were professional athletes who later acquired television fame in talent contests and they also have a Pennsylvania connection.

Scranton native Adam Rippon was the first openly gay U.S. male athlete to win a winter Olympics medal, earning a bronze as part of the figure skating team event at the 2018 games. Here’s one of his performances from PyeongChang:

He’s also notable for winning season 26 of Dancing with the Stars with partner Jenna Johnson. You asked for it and the internet delivers: here are all their performances:

Rippon will appear on our stage on Thursday, October 17 to discuss Beautiful on the Outside, a memoir of his extraordinary journey from humble Pennsylvania beginnings to Olympic gold to TV stardom.

On Monday, November 18 we’re hosting former Philadelphia Eagles long-snapper Jon Dorenbos. Active for an impressive 14 seasons, he played 10 of them right here. And though he was traded shortly before the Eagles won the Super Bowl, as a testament to the esteem in which his former team held him for his many years in green and white, he was even awarded a championship ring.

In a wild 180 second act, Dorenbos, a gifted magician, took his craft to the stage of America’s Got Talent, where he was an 11 season finalist. He also frequently appears on The Ellen Show:

And abracadabra, Dorenbos will be here on November 18 with Life Is Magic, a memoir of his unique trajectory from a tragic childhood to NFL glory and pop culture success.

These are just a fraction of the incredible authors appearing at the Free Library this autumn!

Join in the conversation, Philly! 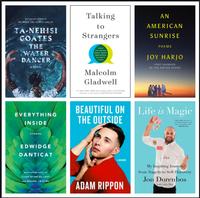 These are just a fraction of the incredible authors, and their equally incredible new books, appearing at the Free Library this autumn!
1 Comment | Add a Comment
Thanks for sharing it. It was interesting.
USA Gadget Review - usa