The Grim Reaper sure was clocking in a lot of overtime throughout 2016. It's definitely not an ordinary year when you wake up one day and the likes of David Bowie, Prince, Muhammad Ali, Gene Wilder, Sir George Martin, Leonard Cohen, Sharon Jones, and Carrie Fisher are no longer here. And that's obviously just touching the surface of the writers. artists, musicians, and pop culture icons we've lost this year.

And I say "we've" lost them because nowadays as soon as someone "famous" dies, you and everyone you know are probably aware of it before a legitimate news source knows; it only takes a second to dash off a tweet or status update. Since we're all plugged in—all the time, pretty soon we're all collectively mourning together out in cyberspace. Some would say the whole online experience cheapens the whole process of death, that it's just another incoming alert on your news feed to be glanced at and then it's on to scan the next listing. I'll admit that it does sometimes seem like we are in a constant state of mourning.

I think the other thing that makes 2016 unique, but definitely not cursed, is that the majority of the people who have passed away are bigger-than-ordinary-life; they've been looked upon as idols and inspirations for years. They're so embedded in pop culture that they seem immortal. Of course, they aren't—none of us. And when we come back down to earth and realize that time and life continue on unabated, well, that's a pretty sobering fact.

So, take the time to mourn your heroes, but then celebrate them even more so: read their books, watch their films, listen to their music on 11. Then take it one step further—be inspired by their lives, their art, and their contributions to this world. Get out there and make your own art, learn an instrument, take a class and learn something new, meet new friends and allies, and make the world a better place!

We only get one go-around, so make the most of it—the below list of people sure did.

Those who passed away this year, in (somewhat) chronological order:

*This is probably not a full list, so any and all potential omissions or corrections are welcome in the comments... 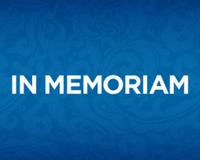