The Centaur Book Shop was opened on 1224 Chancellor Street in Philadelphia by Harold Mason. Initial funding was partially supplied by John Frederick Lewis, the Philadelphia bibliophile and philantrophist whose important contributions to the Free Library of Philadelphia include extensive collections of manuscripts held in the Rare Book Department and early 20th century art books held in the Art Department.

The Centaur was much more than just a shop; in addition to stocking the latest avant-garde literature it functioned as a public literary salon and private meeting club for Philadelphia's intellectual elites. Mason's interest in fine private press productions led him to establish the Centaur Press, which kicked off in 1924 with Song of the Broad-Axe, illustrated by local artist Wharton Esherick.

Esherick is best remembered today for his sculpture and woodwork, including the iconic work created for the South Philadelphia Branch of the Free Library in 1965 entitled Rhythm nr.1. But he was also active as a printmaker using his same chosen medium and produced numerous woodcuts. Many of these were created to illustrate books published by the Centaur Press. Esherick was closely involved with the Centaur community and produced several versions of the centaur device including a sculptural sign for the shop. Other examples of Esherick's fine book work can be found at the Free Library, such as the woodcut illustrations for Amory Hare's Tristram and Iseult and Philip Dalmas' As I Watch'd the Ploughman Ploughing. His working studio has been preserved as the wonderful Wharton Esherick Museum in nearby Paoli.

Harold Mason's Centaur Shop moved in 1933 to a building then owned by the Library Company of Philadelphia on 206 South Juniper and continued to publish works of verse and prose along with a bibliography series. Many books printed for the Centaur can be used in the Free Library; a list of them can be found in our catalog. 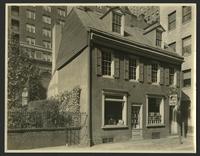 Exterior of the Centaur Book Shop at 206 South Juniper Street. Milton R. Holmes, 1930s. Rare Book and Manuscript Library, University of Pennsylvania
Woodcut illustration for Walt Whitman's Song of the Broad-Axe by Wharton Esherick for the first publication of the Centaur Press, 1924
One of several centaur devices designed by Wharton Esherick for the Centaur Press
3 Comments | Add a Comment
Wow! It's always exciting to see artists generally known for their work outside of print media given acknowledgment for their prints and drawings. When I clicked on Wharton Esherick in this post, the list of resources available is huge! Thanks for sharing
Judith Gammons - Philadelphia
A very useful look at this influential book shop. Many thanks. I would note that The Centaur Book Shop published books before 1924. "Stephen Crane: A Bibliography," compiled by Vincent Starrett, was published by The Centaur Book Shop in early 1923. I don't know the publication month, but I own an inscribed edition with May 1923 inscribed by Starrett to Philadelphia O.L. Griffith, a fellow Crane collector.
Ray Betzner - Downington, Pa.
I think my father worked there in the middle 20's while he was in high school. He spoke of Bennett Cerf coming by on a regular basis. Also, I have 2 wood cuttings and did not know where they came from. I will do a little research to see if I can tie them to a specific book or publisher. My father's hobby was photography and I think we have some pictures of the store and possibly a room above the store that was used as a meeting place for authors.
John Lange - Jackson Mississippi