Our first cohort of staff members participating in the Skills for Community-Centered Libraries training recently learned about and explored team roles and dynamics. Staff reflected on their own strengths and what attributes they bring to a team. Are they great at keeping everything running smoothly? Do they enjoy providing in-depth knowledge?

Cohort 1 training participant Mary Westbrook, a Librarian in the Parkway Central Children’s Department commented, “In the first two trainings I learned that I may have team roles I feel most comfortable fulfilling, but a public library often makes you step out of your comfort zone. Depending on the situation and which co-workers are there, you may have to take charge even when that’s not your assigned role. When team roles shift, communication is key. Everyone on the team needs to know what’s happening and who is responsible for what.”

Before the training launched, the Free Library’s Cluster Leaders shared at a meeting how they develop positive team dynamics.

West Philadelphia Cluster Leader Darren Cottman explained, “In my cluster meetings, staff meetings, and one-on-one encounters, I encourage staff to work as a unit. This includes staff, besides librarians, supporting outreach and programming with librarian guidance. I strengthen my relationship with staff members by learning their interests. I give them opportunities in supervisory capacities (acting), and provide opportunities to explore their interests through programming, collection selection, and overall input, when they express the creativity and interest in doing so. I have several Library Assistants who support programming, working with librarians, Friends Groups, and community members.”

North Central Cluster Leader Toni Hoagland observes that teamwork can enhance community engagement. “I have strengthened my relationship with Community Organizer Fred Ginyard by tapping into his skills in facilitation and networking with the community. I have developed a strong staff team, through cluster meetings, trainings, and by having my branch supervisors participate on the North Central Community Council. As a result, there has been a great increase in creative programming and community engagement at the six North Central Libraries. Library Assistants have become enthusiastic about creating their own programs, and took the initiative to apply for Hatching Innovation mini-grants from Strategic Initiatives for funding to support them. Some examples are the Nicetown Children’s Theatre Workshop Series, Sewing Club, and Astronomy Club at Logan Library.”

Workshop 1 also suggests that staff teams collaborate externally to fill needed roles. Mary Westbrook pointed to the example of the After School Activities Partnership (ASAP) chess clubs, which have operated at various library locations since 2004. According to ASAP Director of Chess Programs Martin Collette, the program is currently running at eight libraries. "The Walnut Street West Library is one of our larger library based chess clubs and often has students competing at ASAP Chess tournaments throughout the year. ASAP can provide training and supplies for libraries that want to start new chess clubs."

Mary also mentioned a 2016-17 partnership with EPAM Systems in which volunteers taught coding to students ages 7-12 once a week in the tech lab at Parkway Central Library.

Library Supervisor Marianne Banbor, also a participant in Cohort 1, described the English as a Second Language (ESL) classes taught by volunteers at Independence Library. The ESL program previously met at a law office in Chinatown, but they outgrew the space. The program coordinator asked if they could use Independence’s meeting space, and soon the room was filled with volunteer teachers and students.

According to Marianne, “The Volunteer Services office at Central is an important part of this team effort. They recruit volunteers for the ESL classes and ongoing ESL English Conversation Group." Nad Rosenberg volunteered as an ESL instructor three years ago after seeing a posting on the Library website. Her classes typically include adults from around the world, including China, Iran, Mexico, Venezuela, and Russia. Nad loves teaching ESL classes, because her students are “wonderful, grateful, and fun."

Have you seen groups of library staff members working together as a cohesive team? Can you think of examples of community partners adding capacity to a library team? 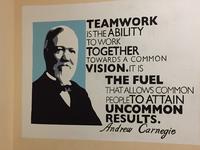 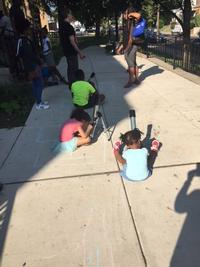