In 1870, Philadelphia was no longer the nation’s largest city, but rather the "Workshop of the World" with an endless need for skilled and unskilled workers. This, along with established and welcoming communities of previous immigrants, attracted many of the millions fleeing poverty and political unrest in Europe. Most of these immigrants landed first in New York or Boston, ports that offered shorter voyages and fast ships powered by steam rather than sail.

In 1872, over 400,000 immigrants arrived in the US, and records show only 154 officially entered through Philadelphia. This was a sad state of affairs for our once thriving port, but one man saw it as an opportunity.

Clement Griscom was born a Quaker, a direct descendent of Andrew Griscom, who came to the New World with William Penn in 1682. He grew up in a well-to-do family, was educated in Quaker schools, and graduated from Central High. But instead of going to college with his classmates, Griscom took a job as a clerk with a shipping firm. By age 22, he was a partner.

Griscom was fascinated by international shipping and longed to see the U.S. reclaim the dominance it had lost as steamships took over the business. He found a willing partner in the Pennsylvania Railroad. Since its inception in 1846, the railroad had expanded its reach by building and buying up local train lines throughout the east and midwest until it had direct access from Philadelphia, west to Chicago and St. Louis, and north to all the Great Lakes. It was the major transporter of coal, oil and agricultural products to the major cities of the east coast as well as European ports. By 1870, the PRR was looking to expand into shipping. Griscom and PRR first formed The American Line with four steamships built in the U.S. then expanded by creating the Red Star Line using ships built in Antwerp with subsidies from the Belgian government. Part of PRR’s contribution to the venture was to provide the docks in Philadelphia. In addition to a number of warehouse docks from Girard down to Dock Street, the Pennsylvania Railroad built the Washington Avenue Immigration Station on Pier 53 in 1873.

The Washington Avenue Immigration Station was much smaller than Ellis Island, in part because it did not need a medical facility or quarantine hospital. Medical screening was done at the Lazaretto, down river, before ships reached Philadelphia. The station had two levels. Passengers entered on the upper level where they went through the customs and immigration process. Single women were often denied entry, since it was thought that they would be unable to support themselves and forced to turn to prostitution. The immigration station provided a place where couples could be married on the spot, enabling more women to enter the country legally. The lower level offered a currency exchange, dressing rooms, and a ticket office. Immigrants could walk across the street and board a PRR train to the coal mines, factories, and farms of the Midwest or Great Lakes region. Many headed for St. Louis and continued from there to the California gold fields. The Red Star Line in Antwerp sold tickets that included both a berth on a ship and a train ticket to any destination on the Pennsylvania Railroad line.

Griscom’s gamble paid off and by 1910, when Philadelphia became the country’s third largest immigration port. Many immigrants chose to stay in Philadelphia. They could walk from the Immigration Station to the Irish and Italian neighborhoods of South Philadelphia or the Jewish neighborhood near South Street. In fact, Philadelphia’s Jewish population became the second largest in the nation. The Washington Street pier was torn down in 1915 in anticipation of rebuilding by the federal government, but the drastic reduction in immigrants during WWI and the strict immigration laws of the 1920's eliminated its need.

In 2014, Pier 53 reopened as a waterfront eco-park. It features Land Buoy, a sculpture featuring a spiral staircase with a crow’s nest. Artist Jody Pinto hopes visitors will climb her stairway and experience what it must have been like for immigrants to see their destination for the first time. If you visit the park you may run into Susan McAninley, a Pennsport resident who has spent several years recording stories of the immigrants who passed through the center. McAninley searches immigration and genealogy files and records the stories to build portraits of the real people who passed through the station. She then shares these with local history groups stating, "The desire to make a better life was the same a hundred years ago." 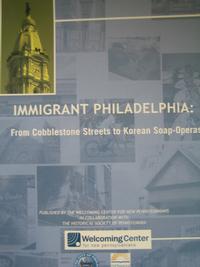 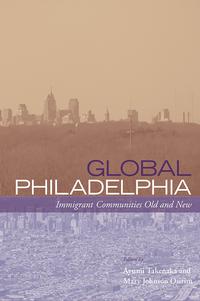 The American Lines' SSHaverford transported immigrants from Liverpool to Philadelphia.
Interior of the Washington Street Immigration Station
4 Comments | Add a Comment
Wonderful article as always Sally! Don't forget to remind library users that they can also access an astounding amount of primary resources on Philadelphia history and publications contemporary to your subjects that are not available on the web, right here at the library. Those whose interest is piqued by this article might want to seek out 19th century publications of the Pennsylvania Railroad for example, such as these: https://know.freelibrary.org/Search/Results?lookfor=Pennsylvania+Railroad&type=AllFields&sort=year+asc&filter%5B%5D=~format%3A%22Book%22 These first-hand accounts allow the user the experience of original research and they can very easily be requested from the Regional Operations Center or the reference shelves of the Social Science and History and other departments and used in the library. The books visible to the eye to users of the Parkway Central Library represent just a portion of the total collections available by request. Users can ask any librarian at Parkway for help accessing many other materials such as research files, pamphlet collections and microforms. The librarians in the Social Science and History department are trained in genealogical research and can offer assistance for those doing initial forays in that subject. Looking forward to reading more of your terrific articles as you continue to explore the rich holdings this library has to offer!
Alina Josan - Philadelphia
Another thing we can remind blog readers is that the Free Library of Philadelphia provides free remote access to the digital version of the Philadelphia Inquirer from the present to 1860. Library card holders who may have clicked on the link to the 2017 article at "Philadelphia's Jewish population became the second largest in the nation"and were unable to read it due to a paywall, can simply log in to the library website with their card and pin numbers and go to the "Philadelphia Inquirer" database to get access to it (originally published on February 1, 2017 with the title "Immigrants Past - Project revives memories of Washington Ave. Pier.") or the "Philadelphia Inquirer Digital Archive 1860-2001" for additional research: http://libwww.freelibrary.org/databases/index.cfm
Alina Josan - Philadelphia
Thank you for this article Sally. The BRIC department on the second floor in Parkway Central has a wonderful collection of Pennsylvania Railroad history books within the department for anyone interested in more information about the PA Railroad. One can also visit the SSH department for the Maritime Records of the Port of Philadelphia 1788-1880, which focuses on the staff of the ships and not passengers. For passenger information, the librarians in SSH will assist you with additional resources for those lists. Thank you again, for shining a spotlight on the riches of the Philadelphia immigrant story.
Juanita Vega DeJoseph
Thank you, Alina and Juanita, for spotlighting all those terrific resources available to our patrons. I look forward to digging into them.
Sally F. - Philadelphia