The current exhibition in the Rare Book Department’s Dietrich Gallery, entitled Philadelphia - The Changing City, offers a look at centuries’ worth of local transformations illustrated with materials mostly sourced from the library’s Map and Print and Picture Collections. 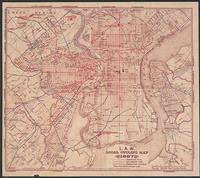 One of the maps on display is a "Local Cycling Map" of Philadelphia from 1897 that contains helpful indications to the cyclist about existing road paving conditions. This map was created by Frank Hamilton Taylor, a prolific local author and artist. Taylor specialized in illustrated articles for the pictorial press and eventually authored many publications that document 19th century Philadelphia. These were usually illustrated with his own drawings and photographs. Much of Frank H. Taylor’s output is held in our Print and Picture Collection, including his "Ever-Changing Philadelphia" print series, numerous photographs of local street views, and watercolor sketches; a selection of all these can be seen in our growing digital library. 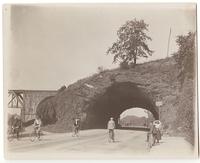 Taylor’s Local Cycling Map was created for the League of American Wheelmen (LAW), a leading national organization for cyclists. The LAW was founded in 1880 just as the safety bicycle was beginning to replace high-wheel cycles, kicking off a massive boom for the sport. To get a sense of the prodigiously ballooning popularity of cycling, compare the number of nationally known clubs recorded by the author of The American Bicycler in 1879 (no more than a dozen) to that of clubs registered under the LAW in 1890 (nearly five hundred!). Members of the LAW participated in meetings, races, and subscribed to its publications, which included Bearings and Bicycling World. Once the LAW succeeded in gaining support for the legal rights of cyclists sharing roads with horse-drawn vehicles, it moved on to its most far-reaching activity. It may surprise some to learn that cyclists were crucial players in the turn of the century Good Road Movement and successfully advocated for road infrastructure long before automobiles came to dominate it. LAW’s 1890 handbook outlines the approach of its Committee on Improvement of Highways in three words: "Education, Agitation, Legislation." Another LAW publication, Good Roads magazine, was a key instrument for these goals.The 1897 cycling map of Philadelphia recommended routes to riders and notes road materials. Unpaved roads made up the majority of American thoroughfares at the end of the 19th century and changing weather generated heavy dust or deep slush. Any Philadelphia cyclist today would plan to avoid routes marked "Belgian block connectors,"  but at the time they represented a welcome alternative to muddy unpaved streets. 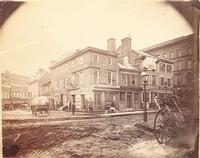 Much of the earliest large-scale paving radiated out from urban centers like Philadelphia but it happened gradually and with much experimentation of material. A 1915 statement from this city’s Bureau of Highways and Street Cleaning published in the Journal of the Franklin Institute, reported that even at that time a good portion of Philadelphia’s roads were made of unpaved dirt. By then asphalting was becoming more common but much of Philadelphia was still block-paved using a wide variety of materials: granite, brick, wood, and even metal slag.

The Rare Book Department galleries, including the Dietrich Gallery showcasing Philadelphia: The Changing City, are open to the public from 9:00 a.m. to 5:00 p.m., Monday through Saturday. A guided tour of the department’s general collections and the William McIntire Elkins Library is available at 11:00 a.m. every day. For more information on the Department, please visit freelibrary.org/rarebooks or email erefrbd@freelibrary.org. 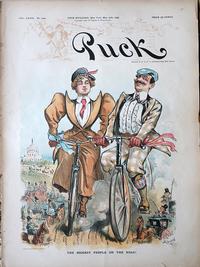 “The biggest people on the road!” Puck magazine cover from 1896, the height of the American bicycle craze.
Add a Comment