Neighborhood Beginnings: from Barnyards to Broadway in East Oak Lane

The Oak Lane area of North West Philadelphia has an rich history of unique architecture and noteworthy residents. East Oak Lane spans from Cheltenhan Avenue to Godfrey Avenue and from Broad Street to North 5th Street. West Oak Lane stretches from Cheltenhan Avenue to Stenton Avenue and from Vernon Road to Broad Street. West and East Oak Lane both stand out from other Philly neighborhoods because of their innovative use of green space, as William Penn had initially developed it as a "Green Country Town".

Read on for some more interesting facts and history about East and West Oak Lane... 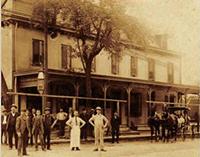 He built a log house near a dirt road. The area around his farm became known as Milestown. In the 1870s, the area was renamed Oak Lane to commemorate a 300 year old oak tree that had fallen in a storm.

In 1761, a descendant of the original settlers named Joseph Armitage donated a stone house on his property for use as the first school in the area.

It was at what is now 13th Street and Oak Lane Avenue. The community used the building as a public meeting hall as well. In 1818, a two-story octagonal school building was built next to the first. In the 1870s, the community deeded the property to the Philadelphia School District which demolished the existing buildings and built the Ellwood School. This school still operates as a K-5th grade public school. 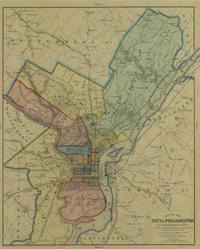 It was annexed by Philadelphia as part of the Consolidation Act of 1854. Oak Lane remained a farming community until the late 1850s when the Northern Pennsylvania Railroad built a line from Front and Willow Streets (just north of Callowhill) to Bethelehem. The railroad’s primary purpose was to transport coal from the Lehigh Valley but it also made Oak Lane accessible to city dwellers seeking summer breezes.

By the 1880s, Oak Lane had become a popular summer place. 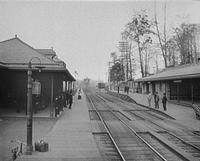 The railroad built Lawnton Station between the two primary vacation hotels, Lawton Mansion and Kenilworth Inn. At the same time, some visitors tired of renting summer cottages and decided to build their own.

One of the first builders was Thomas Henry Asbury. 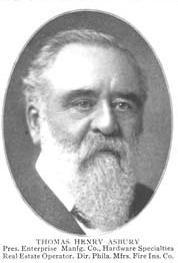 Asbury was owner of the Enterprise Manufacturing Company, a hardware factory in the West Kensington neighborhood. He purchased 100 acres in northwest Oak Lane and built lavish homes for himself and his children on what is now Asbury Terrace. He then sold tracts of land to others who built similar homes. Other summer residents, such as Peter Woll, followed Asbury’s lead, buying up large lots and hiring famous architects such as Horace Trumbauer to design fine houses.

Many of Oak Lane's homes and churches are built with excavated stone from the Oak Lane Reservoir. 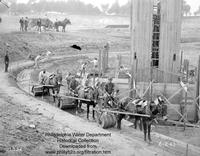 The reservoir, created in 1902, was part of the largest water filtration system in the world at that time.

While Oak Lane was developing as a summer place, adjoining neighborhoods were taking a different direction.

The proliferation of electric streetcars allowed workers to leave the crowded areas near offices and factories. Developers built block after block of rowhouses near the trolley lines heading north, south, and west. Oak Lane gradually shifted from a summer haven to a year-round neighborhood and its residents commuted by railroad and later by automobile. It was not an enclave of Gilded Age wealth like the Main Line or Elkins Park, but a community of manufacturers, physicians, and other professionals living a comfortable middle class life.

The Ladies Review Club of Oak Lane raised funding to buy land for a library. 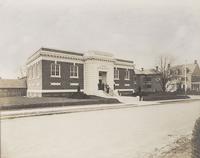 $400 was raised, plus an additional $5000 by local residents, enabling Oak Lane Library to become one of the 30 Free Library branches built by Andrew Carnegie. It opened in 1911 at 12th Street and Oak Lane and remains a vital part of the community.

In the 1920s, real estate agents split up Oak Lane. 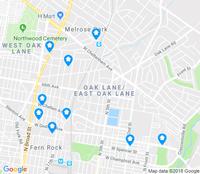 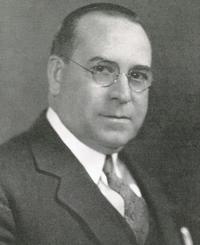 This was the first college permitted to grant the Doctor of Optometry degree. He began work as a newsboy selling papers and became a reporter for the Philadelphia Times before going into advertising. Fitch gave up his successful advertising career to train as an optometrist and devoted the rest of his life to raising educational standards and recognition for this profession. 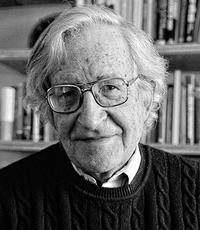 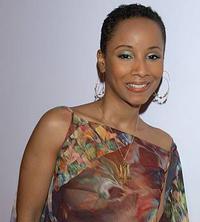 She began playing piano at age 8 and writing songs at 11. Green’s big break came at age 19 when she toured internationally as a backup singer with Jill Scott. She signed with Columbia in 2001 and has produced six albums. Green is also a spokesperson for special needs children.

Leslie Odum Jr., most famous for his role as Aaron Burr in the Broadway production of Hamilton, grew up in East Oak Lane 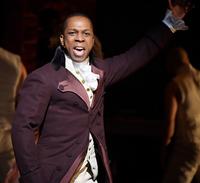 With encouragement from his fifth grade teacher at Masterman School, he won a scholarship to Freedom Theater and performed in workshops and plays around the city. At 17,  he landed a small part in Rent on Broadway and was the youngest person in the cast. 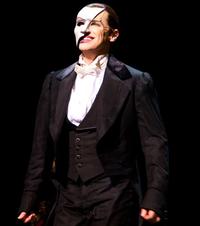 He played the title role in Phantom of the Opera on Broadway for over 8 years. Panero saw his first Broadway show at age 12 when his parents took him to New York to see Philly native Andrea McArdle in Annie. He immediately signed up for voice lessons and got his first job at 13 at the Huntingdon Valley dinner Theatre. Panero worked in theater all through high school and college at Temple University and headed to New York the day after he graduated. Within two weeks he had a job on Broadway. 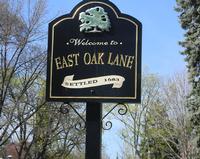 East Oak Lane
6 Comments | Add a Comment
Marita's co-authors are Rachel Hildebrandt and the Old York Road Historical Society; DiBenedetto's study ends with 1876-1976.
T Michael Poxon - PHILADELPHIA
Thank you for your comment, Michael. We have corrected the errors you noted. I appreciate your careful reading.
Sally F. - Philadelphia
It was wonderful to read about East Oak Lane where my favorite public library is located!
S. Wilson - Philadelphia
I grew up at 6520 N. Park Ave and enjoy this article! I believe the grandson, Billy, was in my class at Elwood. The farm house that had to go back to the early 1800's was on my street owned by a Mr Auraback. Nice to hear the history of my elementary school, library and neighborhood! Thank You!
Rich Rosenau - Ambler,Pa
One of my friends when I was growing up in East Oak Lane was Pat Quinn who was not only a Broadway Stage actor, but also served as the president of the stage actors guild.
:-Ann Martha - Newtown Square, PA
Lived at 1950 Penfield,West Oak Lane 1937-1941;1008 seventieth Ave 1941-51; attended Holy Angels School
Dolores Mahony Velez - Anaheim,Ca