Like all of you, we’re adapting to the realities of social distancing in the era of COVID-19. And while we can’t gather in the Parkway Central Library’s auditorium for a new season of Author Events, we can still bring you a host of virtual talks that you can experience—and even participate in—from wherever you’re hunkering down this autumn.

Our season starts on Tuesday, October 20 with a free event featuring Asha Lemmie, author of the New York Times bestseller Fifty Words for Rain. The critically acclaimed debut novel (which Lemmie began writing when she was 16 years old) tells the story of a child born to a married Japanese aristocrat and her African American GI lover. It was Good Morning America’s Book Club pick for September.

Next up, on Wednesday, October 21 we’re hosting a free event with legendary journalist Maria Hinojosa and her memoir Once I Was You. The longtime anchor and executive producer of NPR’s Peabody Award-winning radio show Latino USA will discuss her upbringing as a Mexican American and our current immigration crisis with Helen Ubiñas, the metro columnist at the Philadelphia Inquirer.

On Friday, October 23 we’re hosting a ticketed event (which includes a book) with comedian’s comedian Colin Quinn and Overstated: A Coast-to-Coast Roast of the 50 States. The actor, writer, and former Saturday Night Live Weekend Update anchor lambastes the foibles, sacred cows, and quirks of America’s very dissimilar states. Quinn has also staged several one-man Broadway shows—addressing everything from the fall of world empires to his family—which include My Two Cents and Red State, Blue State. His fifth show, The New York Story, was based on his Brooklyn upbringing and landed on Netflix in 2016.

Join us on Tuesday, October 27, for a free event with one of America’s greatest poets and a central figure of the Civil Rights Era and Black Arts Movement, Nikki Giovanni. In her fourth appearance with us, the outspoken author and seven-time winner of the NAACP Image Award will present Make Me Rain, a celebration of her community and illumination of the pervasive stains of American racial injustice and prejudice. When you have a few extra hours, it’s worth sitting down and watching her 1971 conversation with James Baldwin, in which they discuss, well, pretty much everything.

At noon on Wednesday, October 28, we’re hosting a free event with Veronica Chambers and Finish the Fight!: The Brave and Revolutionary Women Who Fought for the Right to Vote. Combining biography and portraiture, it profiles some of the fierce but forgotten heroines of American women’s suffrage. Chambers, an award-winning memoirist and editor of Past Tense, the New York Times archival storytelling initiative devoted to publishing articles based on photographs recently rediscovered from its archives, will be joined by her Finish the Fight! collaborators: Rachelle Baker, illustrator; Jennifer Harlan, writer; Steffi Walthall, illustrator. Here’s a pretty neat video of Walthall narrating her process of drawing and illustrating the book’s cover.

Hey y’all! In honor of the Finish The Fight’s book birthday I whipped together a quick process vid of drawing the cover. I only have footage from procreate at the moment but I hope you enjoy! ♥️ . . . #processvideo #finishthefight #drawing #versify #suffragette #womenssuffragemovement #bookstagram #bookcover #artistsoninstagram

We’ll be rounding out October with the return of Barbara Kingsolver on October 29. This event will be ticketed and all attendees will receive a copy of How to Fly (In Ten Thousand Easy Lessons), the Pulitzer Prize finalist’s new poetry collection (sorry, it’s not actually about how to fly) that reflects on both the exquisitely noted and overlooked workaday wonders of the untamed worlds inside and around us. Read this lovely and worthwhile review from The Guardian.

And the events won’t stop there. As a sneak peek for November, we can tell you that on November 4, we’ll present a conversation with Pulitzer Prize-winning playwright Ayad Akhtar and Homeland Elegies, his new novel about the rifts, cracks, and fissures in post-Trump America.

On November 5, we’re hosting H.W. Brands and his dual profiles of American abolitionism’s two towering figures, Abraham Lincoln and John Brown, The Zealot and the Emancipator. Kismet, considering the premiere of The Good Lord Bird, Showtime’s new series about Brown, based on the book by A.E. favorite, James McBride.

Lastly, we’re pleased to report that we’ve rescheduled our formerly canceled event with Eddie S. Glaude and his biography of James Baldwin for November 24.

More to come! Don’t forget to pre-register for these virtual events through our website at freelibrary.org/authorevents. 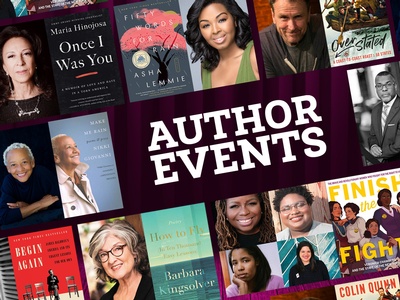 Author Events kick off the fall season on Tuesday, October 20.
Add a Comment