Philadelphians, we need to talk!

Join your neighbors at eight Free Library of Philadelphia libraries between May 23 and June 30th, to watch and discuss individual episodes of the award winning PBS documentary series Philly D.A.. We seek to learn from you, and from each other the answers to several pressing questions.

Do you and your neighbors feel safe? If not, why not? And if your immediate community has enjoyed peace, what would it take to spread it everywhere across our city? Where does crime come from, and what should justice look like? We Philadelphians lock up a lot of our own, which contributes significantly to making the United States the most incarcerated country in the world. How does the criminal justice system really work? Does it work at all?

In 2017 and again in 2021, Philadelphia voters elected Larry Krasner, as Philadelphia’s District Attorney, the top government official responsible for prosecuting crimes committed in our community. He ran on a platform of new approaches to the problem of community safety, which are informed and pushed by local and national movements to rethink policing and prisons. The movement and his tenure as an elected official riding the wave of popular discontent with the standard approaches to crime have not been without controversy. We need to talk!

These are some of the stories explored by the eight episodes of the Philly D.A. documentary, which is a gorgeous and loving portrait not of Krasner, but of us and our community! It’s about our city and the lives of the people who intersect with the District Attorney’s Office. The docuseries premiered at the Sundance Film Festival and was named one of the Best TV Shows of 2021 by TIME, The New York Times, and The Washington Post. Vulture said

“PHILLY D.A. is the second coming of THE WIRE, in docuseries form”

And the New Yorker observed, correctly, we think:

“Philly D.A.” feels more like a political thriller than a documentary.... [W]atching Krasner and his team do what they’re trying to do is too compelling, no matter how messy, frustrating, and painful things get."”

So please join us for community conversations following each screening to chat about what needs to change in our city and to learn more about resources in your neighborhood to make it happen:

Schedule of screenings and discussions

Free tickets, but please RSVP on Eventbrite for this special after-hours screening.

After screening a particularly powerful episode of the series which centers on issues of probation, parole, and re-entry audiences will be joined by a panel of experts and insiders including protagonist and activist LaTonya Myers, AFSCME DC47 Union President Cathy Scott, and Moderator Chris “Flood the Drummer” Norris for a candid discussion followed by Q&A. Doors will open at 5:15 pm and light refreshments from Down North Pizza (which makes for itself the mission of employing the formerly incarcerated) will be served prior to the 6:00 pm screening followed by a talkback beginning at 7:00 pm.

Episode 4* synopsis (watch clip) : Formerly incarcerated activist LaTonya Myers advocates for her own freedom after starting a 10-year probation sentence. Meanwhile The DA’s team tackles systemic probation reforms, facing off against judges who embrace the status quo of excessive supervision. *Please note: you do not need to have watched prior episodes to be hooked on the drama and thoroughly enjoy this one. This is true throughout the series.

As many activists call for public safety solutions outside of the criminal legal system, we will discuss what that looks like, while highlighting advocates addressing issues such as cash bail from a community oriented standpoint. We’ll share existing resources and hear from people imagining new paths forward.

Free tickets, but please RSVP on Eventbrite for this special extended hours event

Do life sentences keep our city safe? What is the cost of a life-sentence to a person, their family, their community, and especially when that person is a juvenile? We will use episode 5 as a jumping off point to discuss and learn about community youth resources with neighborhood advocates.

Episode 5 synopsis (watch clip) : Krasner reviews the case of Joseph Chamberlain, who was sentenced to life without parole as a juvenile for murdering another teenager in 1992. He struggles to persuade the public and the media of systemic solutions to public safety during a spike in the homicide rate.

Opioid addiction affects over 1 million people in the US and Philadelphia is one of the cities hit hardest by this public health crisis. Many cities are adopting harm reduction practices like free needle exchange or offering free Narcan kits and training to prevent overdose. But can these practices alone keep a neighborhood safe? We’ll talk about what resources exist, what resources are needed, and the role of police and the legal system in addressing the crisis.

Episode 6 synopsis (watch clip) : Councilmember Maria Quiñones-Sanchez guides Krasner through the politics of Kensington, the neighborhood at the center of the heroin and violence epidemics as crime continues to rise.

Cash Bail has been a hot topic in Philadelphia over the past couple of years. In this discussion we will dig deeper into pre-entry, bail navigators, and community contributions and advocacy and how all this plays a role in community safety.

How do we hold people in power accountable? Whether it’s done by police or elected and appointed officials, when misconduct happens how can those outside the legal system seek justice? We will discuss with community activists and city officials what’s working, what isn’t, and how this ultimately affects the safety of a neighborhood.

Episode 2 synopsis (watch clip) : Krasner and his team battle the police for access to the complete misconduct files while trying to prevent officers with a history of lying from testifying  in court.

Free tickets, but please RSVP on Eventbrite for this special after-hours Saturday event

What can we do when the people charged with protecting us are the same people who put us in danger? Who and what are really being protected by law enforcement and the criminal legal system? Drawing from a local case of police violence against an unarmed Black man we will discuss if and how justice can be attained through the legal system, the power of collective organizing, and what is needed to make real change.

Episode 7 synopsis (watch clip) : Krasner’s team makes history by charging an on-duty police officer with murder for shooting a Black man in the back. The family of the victim, David Jones, hopes for justice. Yet Krasner’s prosecution faces an uphill battle because of the police union and state laws that protect cops.

Free tickets, but please RSVP on Eventbrite for this special after hours event

To close out the Let’s Talk: Philly D.A. discussion series we will share clips from multiple Philly D.A. episodes, and hear from Larry Krasner himself as well as moderators and participants from the different library events; what they took away from the discussion, and what common needs were heard across different neighborhoods in Philly. With invited city officials, community leaders, and scholars, this will be an opportunity to talk through some of the attainable and actionable solutions for our city.

We're looking forward to seeing you, and hearing from you and your neighbors soon!

**Philly D.A. is a sponsored project of the Auburn Theological Seminary made possible by a grant from Wyncote Foundation.** 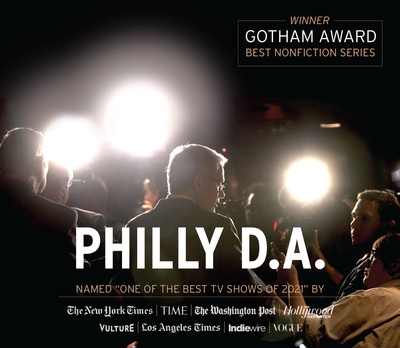 This eight part television documentary was indeed among the best shows of 2021, and every Philadelphian will benefit from seeing it. 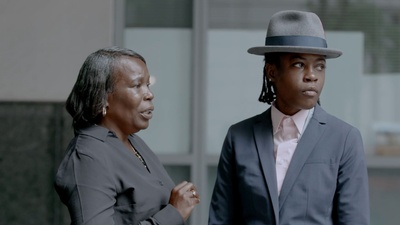 Breakout star from Episode 4 of the series, LaTonya Myers (with hat) is an activist working for probation reform and to uplift the voices of her neighbors. 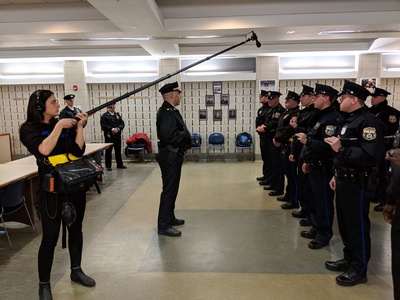 Filmmaker Nicole Salazar records a police briefing in this behind the scenes still.
1 Comment | Add a Comment
This man has a PLENTY of expertise evidence that proves he is innocent of his charges and brady law is included, full of corruption done by Philadelphia City!
Re: Jose Nieves #KS0231 - Sci Phoenix- Phila Co