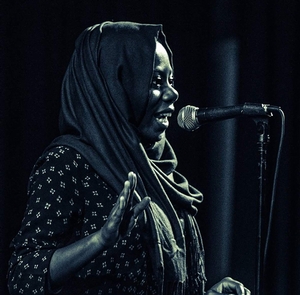 This event has been rescheduled from Monday and is taking place Tuesday, January 9!

The new Philadelphia Poet Laureate will be announced at this Monday Poets program, and this poetry reading will be the first official event of the two-year tenure!

The Youth Philadelphia Poet Laureate, Husnaa Hashim, is a 17-year-old performance poet from West Philadelphia by way of Silver Spring, Maryland. She has been writing for more than 7 years and was first published at the age of 10. Husnaa has competed with the Philly Youth Poetry Movement at the Brave New Voices International Youth Poetry Slam Festival, placed first in the Free Library’s Teen Poetry Slam, and received recognitions including a National American Voices Medal awarded at Carnegie Hall, 1 Gold Key, 2 Silver Keys, and more than 10 Honorable Mentions from the Scholastic Art and Writing Awards. Husnaa’s work has appeared in RookieMag, KidSpirit Online, New Moon Girls Media, the Kenyon Young Writers Anthology, and the “Voices of the East Coast” Anthology, among others. In September 2017, she was named Philadelphia’s Youth Poet Laureate.

Now housed at the Free Library, the Philadelphia Poet Laureate program celebrates poetry’s vital civic role in our city and the power of poetry to create community.