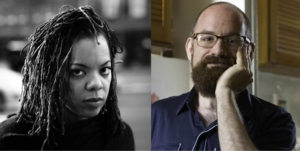 Airea D. Matthews is the author of Simulacra (Yale University Press, 2017), selected by Carl Phillips as the winner of the 2016 Yale Series of Younger Poets. Matthews received an MFA from the Helen Zell Writers’ Program at the University of Michigan. A Cave Canem Fellow and a Kresge Literary Arts Fellow, Matthews is a founding member of the Riven collective along with Marissa Johnson-Valenzuela and Cynthia Dewi Oka. She is an assistant professor at Bryn Mawr College, and lives in Philadelphia, Pennsylvania.

Brian Teare's  collections of poetry include The Room Where I Was Born (2003), winner of the Brittingham Prize and the 2004 Thom Gunn Award for Gay Poetry; Sight Map (2009); Pleasure (2010), winner of the Lambda Literary Award; Companion Grasses (2013), which was a finalist for the Kingsley Tufts Poetry Award and was named one of Slate’s best poetry books of 2013; The Empty Form Goes All the Way to Heaven (2015); and the forthcoming Doomstead Days (2019). His poetry has also appeared in anthologies, including Legitimate Dangers: American Poets of the New Century (2006).