On Monday, May 22, catch the final concert in Mysterious Travelers 3: Internal Investigations, the series which saw musicians meeting minds with librarians to make concerts organized around the vast collections at Parkway Central Library.

Ross Bellinoit plays us out of the third season – he’s a classically trained guitarist, composer, and producer who studied at the University of the Arts. He’ll be presenting his musical findings from his time in the Literature Department, specifically, the poems of Federico Garcia Lorca.

This series has basically been one long victory lap for the Free Library and our partners at the Philadelphia Jazz Project. We’ve gotten some of our most colorful treasures to sing for the people and for the length of entire concerts! These included paintings from the Art Department, rare leaves from the Music Department’s Sheet Music Collection, vanguard Black newspapers from our Newspapers and Microfilm Center, neo-noir detective novels from Philbrick Hall, and more.

Let’s take a look back at this season of Mysterious Travelers with some special highlights...

September: Saxophonist Chris Oatts took on Education, Philosophy, and Religion
The season opener featured Chris Oatts covering Coltrane classics, playing originals, and debuting a 20-minute suite which he told us was based on a reference Jam Session with the Education, Philosophy, and Religion Department. Librarian Ed V. showed Chris a book on which Chris then meditated, kind of like Coltrane did with his classic piece, A Love Supreme.

Here’s a small segment of this suite, with equal measures of Trane inspiration and librarian-led findings:

October: Brent White Spotlights the Parkway Central Children’s Department
November: Kunu Bi Riffs on the Music Department
Jazz Trombonist Brent White used the Parkway Central Children’s Department to build a whole program on Beaty's Knock Knock, and in November, Kuni Bi riffed on some of the classics in the Music Department's Sheet Music Collection, with the intention of bringing these songs back to their motherland of West Africa on homemade African Instruments!

Check out our in-depth blog posts with videos and more from October and November.

December:  Alexis Simmons remixes the Newspapers and Microfilm Center
Our event with Alexis Simmons (aka Alexa Gold) went down with about 100 attendees. At one point, while the band played around her, Alexis read some letters to the editor from our collections of the Chicago Defender newspaper, from African Americans in the early 20th century pouring their hearts out on why they want to move up to the Northern cities or what’s preventing them from doing so. Letter reading starts six minutes in:

January: Jake Kelberman Explores the Art Department
Jake Kelberman riffed on the Art Department for the first Mysterious Travelers event of the new year – he selected photographs by an artist whose works focused on the environment, and Jake wrote pieces about those works, including tunes inspired by the Exxon Valdez Spill and the Colorado Rockies.

February: Matt Stewart Brings to Life the Social Sciences and History Department
Matt Stewart met with our librarians in the Social Science and History department and chose to research the Freedmen’s Bureau, which the US Congress established in 1865 as part of the Reconstruction period. Matt wrote new compositions based on our resources and presented his discoveries gleaned researching the Freedman’s Bureau with librarians. 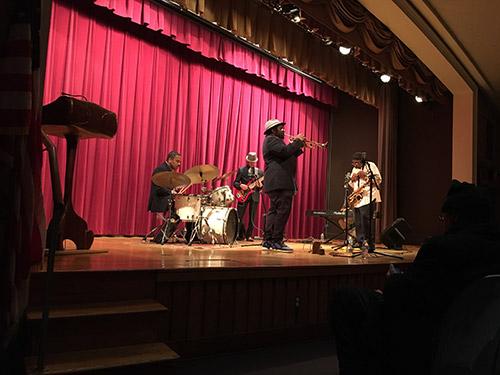 March: Howard Tucker Plays Philbrick Hall
Philadelphia Jazz Project and the Free Library launched a very popular installment during this season's Mysterious Travelers series. Philbrick Hall Librarian Dena H., who worked with the musician, came to MC the event and see the fruits of her labor live. Working together with poet Howard Tucker, they presented a program inspired by the Free Library’s holdings of Walter Mosley’s Easy Rawlins' detective novels. Howard switched from acting out scenes with the musicians – drums stood in for gun shots, etc. – to singing songs from Easy’s point of view.

Dena had a cart of Mosley’s books for patron’s to check out outside the auditorium, took the mic to introduce the show, share a little bit about their reference jam, how Howard had brought some books to Brazil, and more.The cart of Easy Rawlins' books we’d set out were all checked out by the end of the night!

April: Elijah Wood Interprets the Newspapers and Microfilm Department
The Free Library hosted the penultimate installment of Mysterious Travelers with flautist Elijah Wood covering the year 1991. This very moody set was organized on how the media treated three cases of death and dying in 1991: the homicide rate of black men in the City of Philadelphia, the funeral of ex-cop turned mayor, Frank Rizzo, as well as a nationwide Measles epidemic which hit Philly the hardest. The set was bookended with solo bass pieces ranging from ominous to joyful, and the flute, drums, and keys all stirred emotionally.

These concerts have become so popular that we live streamed the latest, so you can view the whole show:

Like any undergraduate studio art class, this third season of Mysterious Travelers has been akin to an assignment where the teacher (the Free Library and Philadelphia Jazz Project) is giving the student (the composer) a prompt with constraints to guide their creative output.

Be present for the final concert in season three on Monday, May 22, when Ross Bellinoit strums us through the Literature Department and out of the season!

Where we explore, through sound, the collections which constitute the Parkway Central Library. 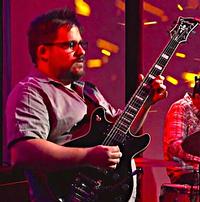 Ross Bellinoit plays us out of our third season.

Elijah Thomas took us through '91 in newspaper headlines.
Add a Comment