A History Minute | 14 Surprising Facts about the Port of Philadelphia

Philadelphia has been a major center of international commerce for over 300 years. Even today, with major port complexes serving major metropolitan centers throughout the country, Philadelphia and its international seaport maintains a preeminent position in several areas of trade.

Read on for 14 Surprising Facts (you may or may not know) about the Port of Philadelphia...

Explore the development of the Port of Philadelphia for yourself through photos, drawings, and maps in the Free Library’s Print and Picture Collection and Map Collection. 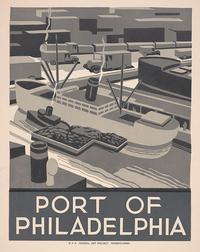 This engaging ca. 1936 poster, created by Robert Muchley for the WPA Federal Art Project Pennsylvania, depicts the Port of Philadelphia in a simplistic style, as a bustling urban port.
Market Street at Delaware Riverfront ca. 1894 (Library Company of Philadelphia)

History of Delaware River main channel deepening (philaport.com)
2 Comments | Add a Comment
WASN'T DELAWARE aVENUE RENAMED cHRISTOPER cOLUMBUS bLVD OR AM i TALKING THRU MY HAT?
Harry Pak - Florida
You are partly right, Harry. In the early nineties South Philadelphia's Italian community petitioned City Council to rename Delaware Avenue to honor the 500th anniversary of Columbus' first trip to the new world. The Lenni-Lenape tribe and the Fishtown Civic Association opposed the name change. City Council compromised and changed the road's name south of Spring Garden. North of Spring Garden it is still Delaware Avenue. Since that was the name Stephen Girard originally suggested it is the one I used.
Sally F. - Philadelphia