Work, especially on farms and in fields, was not glamorous— although artists’ illustrations of it often were. 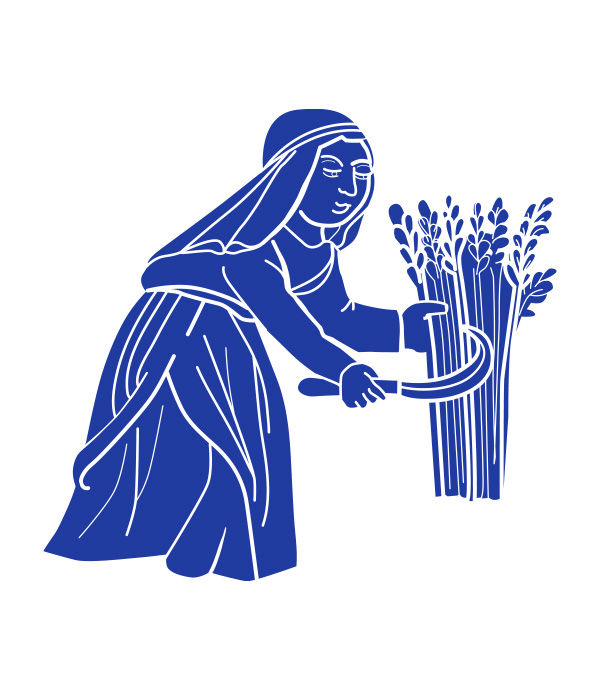 Most work was agricultural. Peasant farmers plowed fields, picked crops, or tended animals. In towns and households, people made and sold things made out of those farmed goods, grinding grain into flour, selling vegetables, or tanning animal skins. Unlike today’s global and industrialized systems that allow us to buy strawberries in January, agriculture was seasonal, and so was labor.

Of course, not everyone worked on or with the land. The objects on view here exist because of tradespeople, who kept records of their sales and expenses, and scholars, artists, and craftspeople, who made luxurious books for the wealthy and noble families. While those in the upper classes may have had no proper “job” at all, an emphasis on hard work can be found throughout the books they commissioned.

Labors of the Month

The Labors of the Months are a medieval cycle of 12 pictures that link rural activities such as planting crops and harvesting grapes to the months of the year. The specific labors chosen in a cycle may vary depending on where in Europe they were made. In illuminated books of hours, the Labors of the Months would be in the first section, as part of the calendar, where holidays and feast days for specific saints are listed. Often each month would have its own page, and each page would include the month’s labor paired with its complementary zodiac symbol. As these books were made for the wealthy, the Labors of the Months depict idealized versions of rural and peasant work. 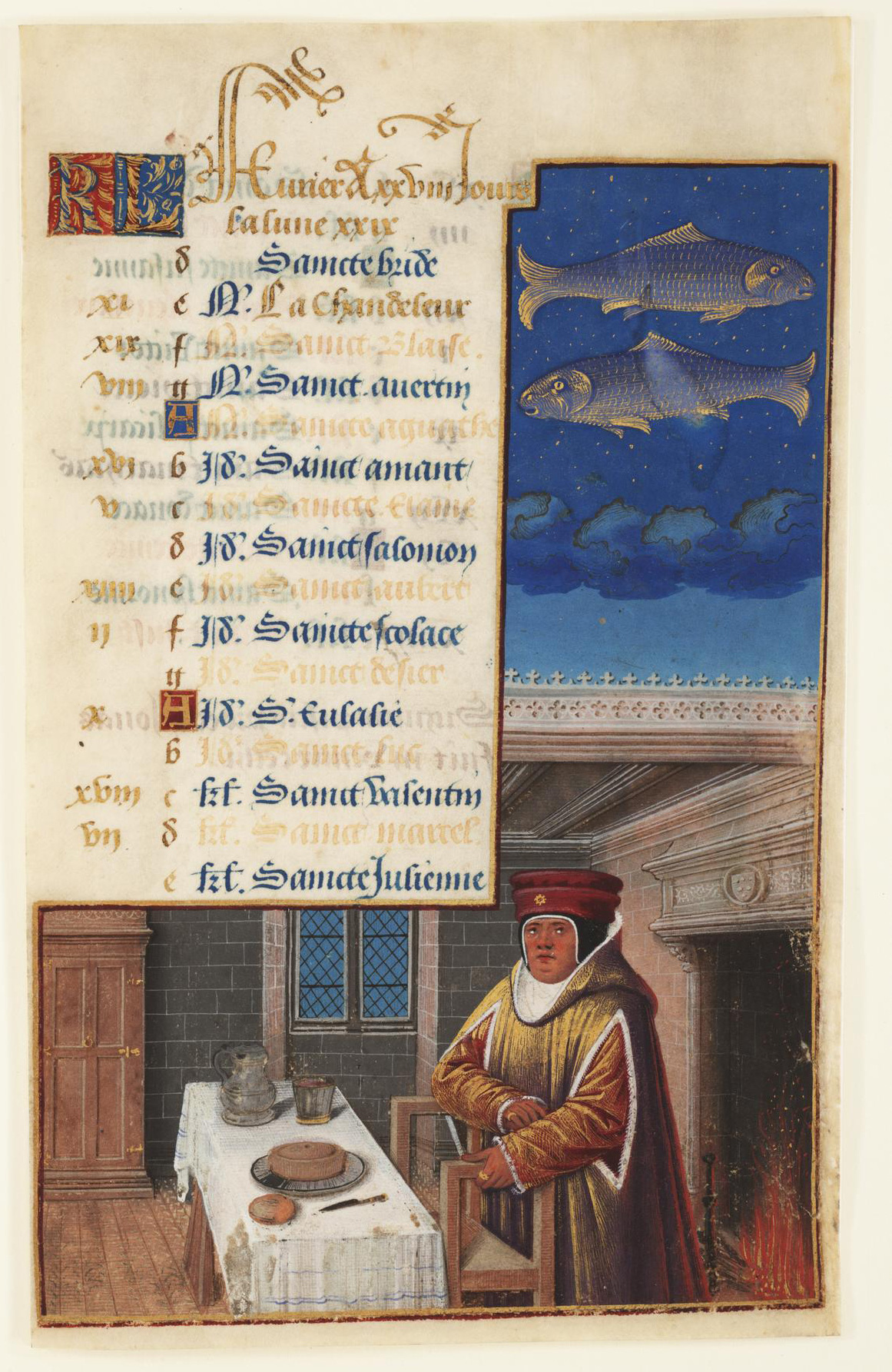 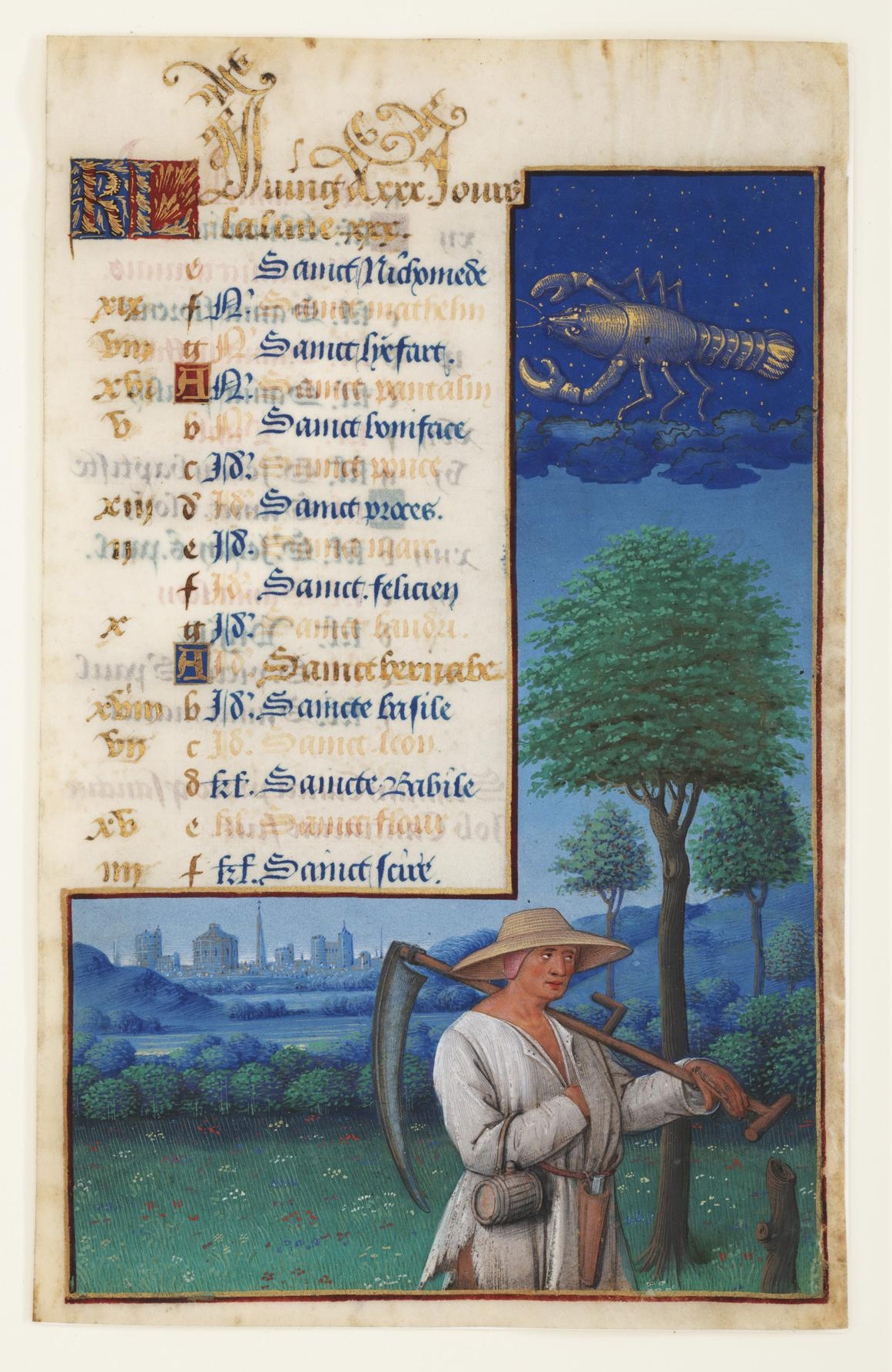 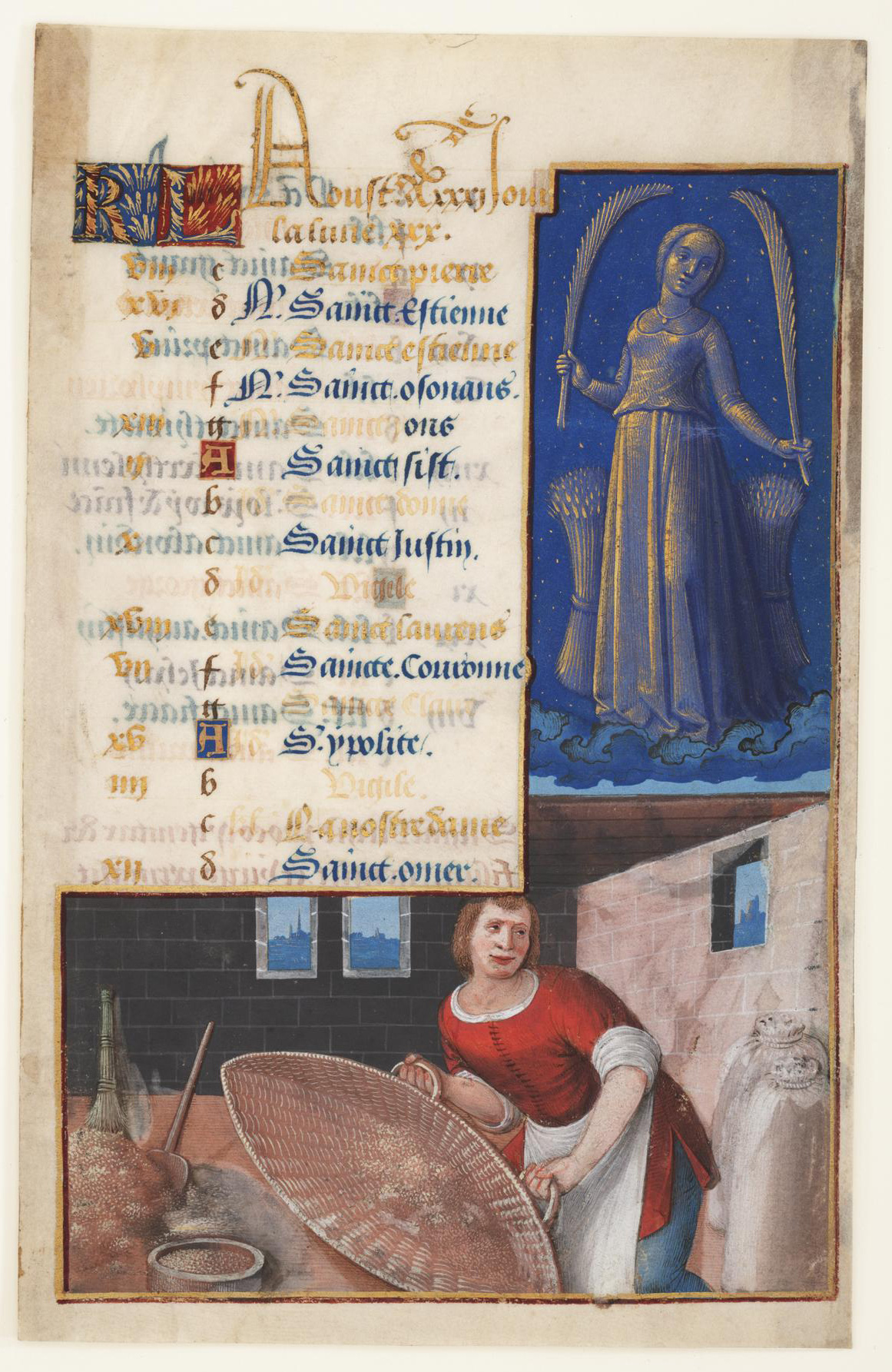 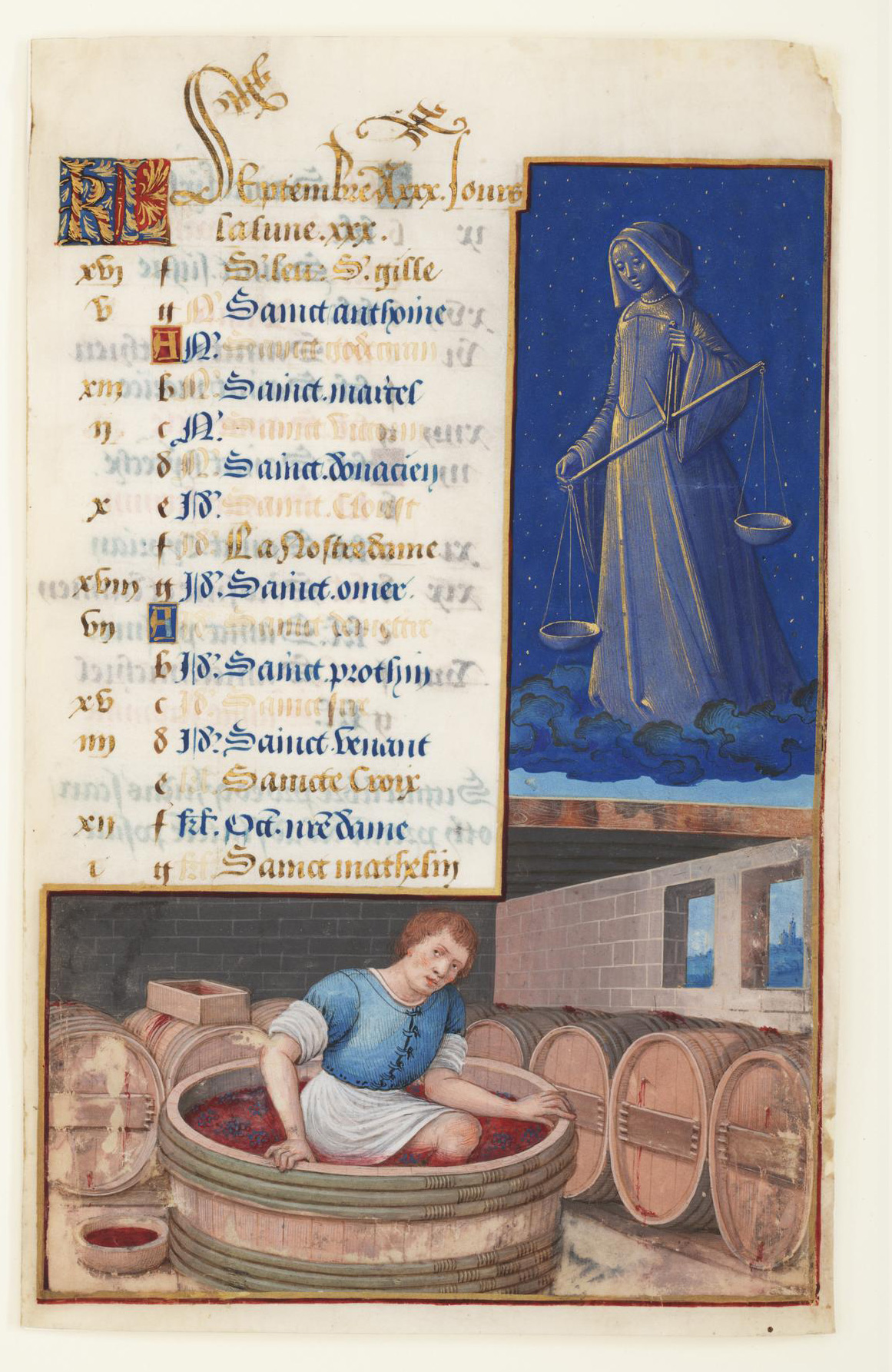 Louis XII was king of France from 1498 to 1515. These four framed pages are leaves from a very lavish book of hours made to celebrate his coronation. The book was painted by Jean Bourdichon, one of the most important manuscript illuminators and a favorite painter in the French court. The paintings—known as miniatures—are remarkable for their rich, rare pigments and how closely the subjects resemble those in oil portraits, rather than being more stylized, as was often the case in manuscript illumination.

Although the practice is frowned upon today, medieval manuscripts have been cut apart, reused, and resold throughout history. The hours of Louis XII was one of the greatest illuminated manuscripts to come out of the French Renaissance, but it was broken apart around 1700, and much of it has been lost. Sixteen miniatures survive, along with some pages of text, in libraries and museums in the United States and Europe. These four leaves, all part of the Free Library of Philadelphia’s collection, come from the book’s calendar.

Each leaf includes the month’s feast days, written in alternating blue and now-faded red, with important feasts in gold. But a further hint of the extravagance of this book is how the bulk of the page is dedicated to sumptuous decoration: full cycles for the Labors of the Month coupled with the signs from the zodiac. February (Pisces) shows a man keeping warm and preparing to feast; June (Cancer) depicts the mowing of hay; August (Virgo) shows grain being prepared after harvest; and September (Libra) shows someone crushing grapes to prepare them for fermentation.

Philadelphians are a lot less likely to work in agriculture than someone living in medieval Europe. But plenty of job classes common today can be traced back to medieval life. The following chart shows some of the most popular job sectors in today’s Philadelphia. We may have more residents working in healthcare (more than 20 percent), but we still rely heavily on retail and hospitality—categories not so different from the vegetable sellers and innkeepers of medieval Europe. 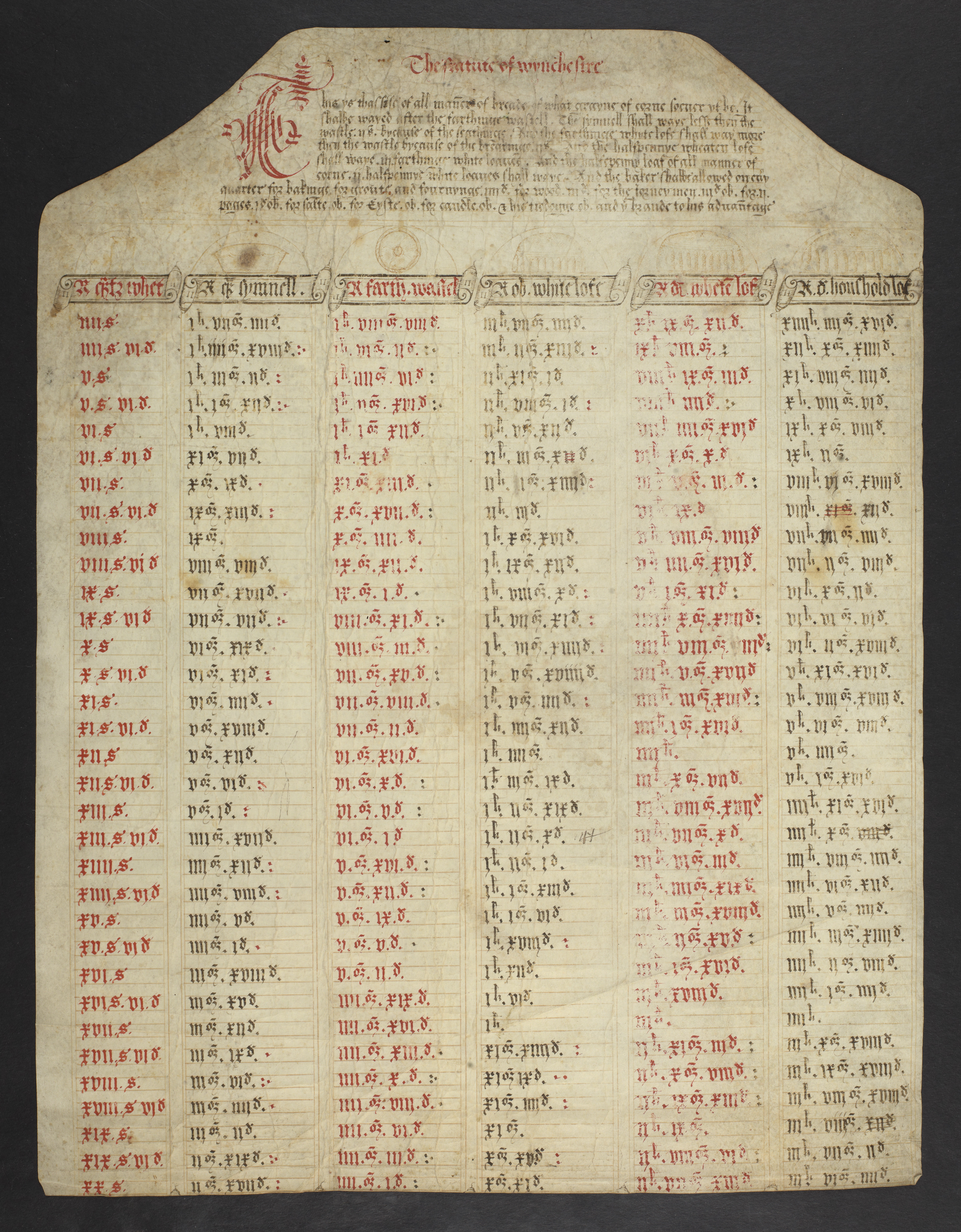 The Assize of Bread and Ale was an English law that fixed the price of bread loaves based on the year’s wheat costs. The leftmost column of this document presents the prices of wheat, followed by columns for the prescribed costs of five common varieties of bread loaf. The assize was serious; bakers found to be disobeying it could be fined or sent to prison. 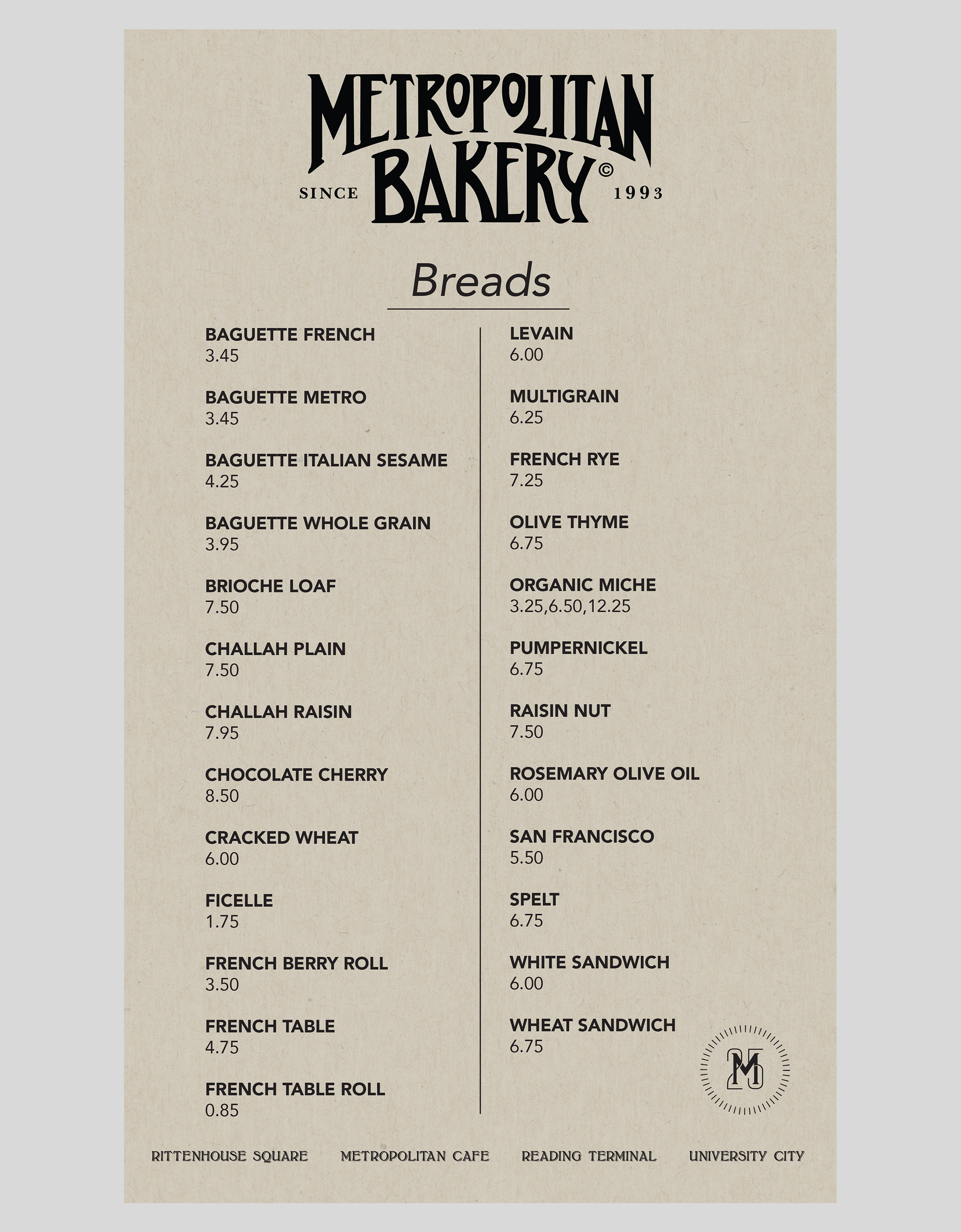 This menu doesn’t have the weight of law behind it like the 16th-century Assize of Bread and Ale document to its left, but it does give us a sense of the types of bread available and what we might have to pay for them. 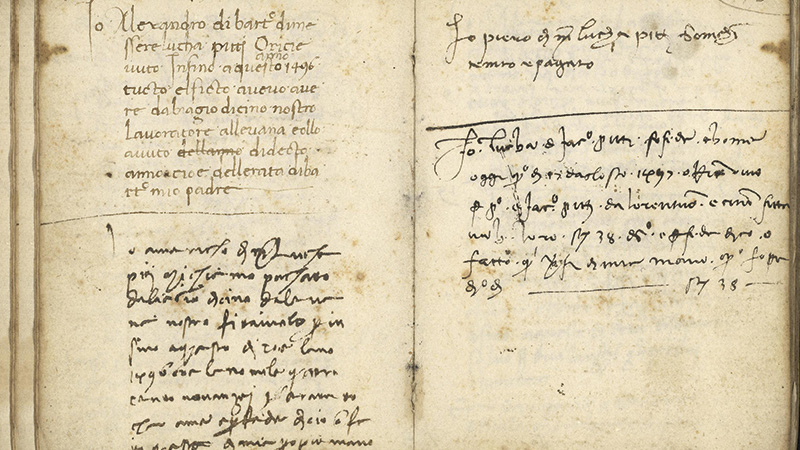 This memorandum book belonged to a grain dealer. It contains entries (written by many different people) for payment for grain, rent, taxes, alms, and other income. There aren’t many entries per year, which suggests that the dealer would also have had a larger book that contained more entries. 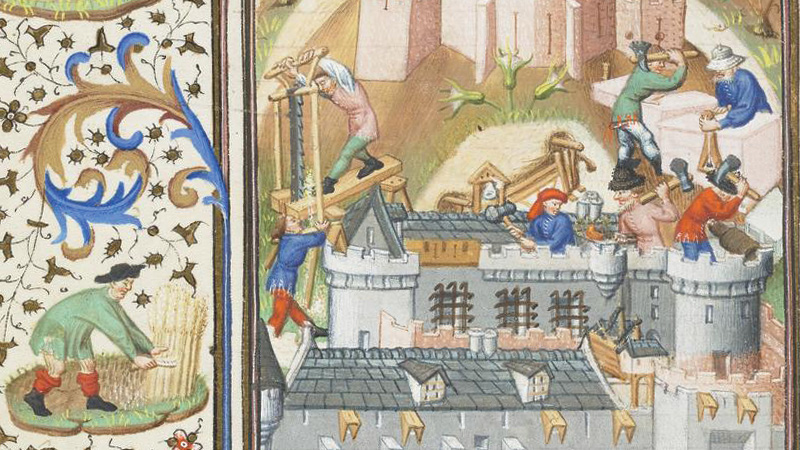 This manuscript is a copy of a 1342 moral allegory by the French poet Jacques Bruyant. It follows the path of the hero, Newlywed, who is saved from the characters of Want, Necessity, Suffering, and Hunger by the figure of Reason. The book is opened here to the Castle of Labor being built by workers made virtuous through their hard work. 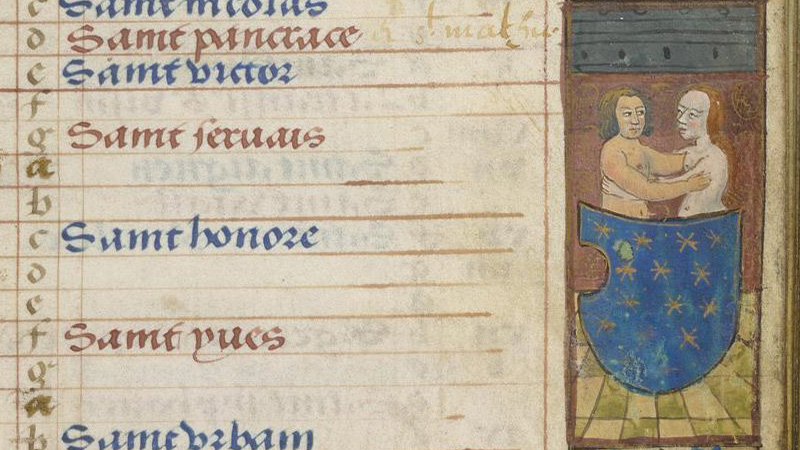 Book of hours, use of Rouen

The 12-page calendar in this prayer book has a full set of zodiac scenes and Labors of the Months decorating its borders. On the left border is a man hawking (the labor for April), and on the bottom right is a man planting trees (the labor for May). The bull on the bottom left represents April’s zodiac sign, Taurus, and on the right is a depiction of Gemini, the twins.