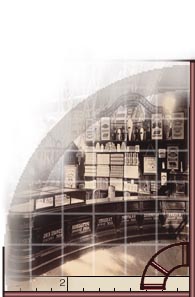 The Centennial Exhibition Digital Collection and web site were developed by the Free Library of Philadelphia with a National Leadership grant from the Institute of Museum and Library Services. The one-year project is the first whole-collection digitization effort by the Library. It is intended to serve as a model for future digitization projects within the Library and for other institutions embarking on similar projects. This section contains the sitemap and technical requirements for optimal viewing, as well as information on the original grant proposal, technical specifications of the project, and project staff contact information. Information about the Centennial Collection and how to order reproductions of the photographs and other related material are also in this section.

In addition to these photographs, the Centennial Collection contains several hundred exhibitor trade cards; Frank Leslie's Historical Register of the United States Centennial, 1876; a two-volume scrapbook containing approximately 800 leaves of mounted items; a salesman's album containing 323 half stereoviews; and various memorabilia and realia including the different types of visitor passes, and a bronze award medal. Additional material about the Centennial can be found elsewhere in the Central Library. The Business, Science and Industry Department has a large collection of books about the Centennial, many of them published during or shortly after the Centennial. The Music Department has a collection of sheet music composed for or about the Centennial. The Edwin A. Fleisher Collection of Orchestral Music includes Richard Wagner's Grand Festival March, composed for and dedicated to the Women's Centennial Committee.

The Centennial Board of Commissioners awarded the sole license for photography at the exposition to Edward L. Wilson, editor of the journal, The Philadelphia Photographer, and his good friend William Notman, a prominent Scottish-born Canadian photographer. Notman served as president of the Centennial Photographic Company (CPC) and Wilson as Superintendent and Treasurer. The other officers of the CPC were W. Irving Adams of New York City, who served as Vice-President, and Notman's Toronto business partner, John A. Fraser, who served as Art Superintendent. A CPC catalog lists 2,820 photographs for sale to the public, many in more than one size. Stereoviews were sold for $.25 each; 5x8" photographs sold for $.50; 8x10" photographs went for $1.00; 13x16" prints for $2.50; and 17x21" photographs for $5.00 each. Exhibitors were charged substantially more for the first print but were offered bulk discounts of up to 20% off the rate charged the public for 50 copies.

All of the CPC photographs are silver albumen prints and were made using the wet-plate process in which glass plates were first coated with a collodion solution of gun-cotton dissolved in alcohol and ether and then sensitized with a solution of silver nitrate. The glass plate negatives had to be exposed while still wet and developed and fixed soon after exposure. Contact prints were then developed in the Company's processing room using albumen paper (paper coated with a mixture of egg whites and ammonium chloride). The prints were then mounted on card stock for sale. This process was both complex and cumbersome. It required lots of supplies, equipment and manpower. However, the process captured images in exquisite detail on the negative plates. The exposure times for the treated glass plate negatives averaged twenty minutes, according to reports by one of the Company's photographers, John L. Gihon, whose "rambling remarks" appeared in every issue of The Philadelphia Photographer during 1877. Exposure times as long as 2 hours were reported, made necessary by the lack of good lighting in many of the Centennial buildings.

The Company was apparently quite successful and their photographs were in great demand both during and after the Centennial. In the book The World of William Notman, Roger Hall, Gordon Dodds and Stanley Triggs estimate that the Centennial Photographic Company made a sizeable profit during the Centennial.

All of the images from the Centennial Exhibition Digital Collection (CEDC) were scanned at the Free Library of Philadelphia (FLP) Digitization Center. The Library purchased two Agfa Duoscan T2000 XL flatbed scanners that allow reflective scanning of images up to 12x18 inches, and transparent media scanning up to 9 1/2 x12 inches. For photographs with significant bowing, or that were too large for the flatbed scanner, a contract photographer created high-quality 4x5 inch color transparencies, which were then scanned. In addition, a selection of approximately fifty lithographs, fifty trade cards and some related materials were scanned.

Resolution and file formats for access files and thumbnails were selected to facilitate speed of transfer via the Internet and to minimize the requirement for high-speed CPUs and a large amount of memory on the end user computers. All master files were saved as uncompressed TIFF files with appropriate header data, adapted from the Library of Congress TIFF header tag requirements.

During the first quarter of the project, the project director and scanning technician prepared a complete shooting script for all the material in the project. Each item in the script was assigned a unique seven-digit number that was incorporated into the file name and used to retrieve the images from the web server. CEDC items have been batched in nineteen different categories. Photographs made by the Centennial Photographic Company are batched by size (7 categories). Additional categories include photographs by other photographers (3 categories), lithographs, engravings, manuscripts (2 categories), sheet music, trade cards, a two-volume scrapbook, maps, and realia.

A prescanning form was developed by the project director for each category in the CEDC for entering basic descriptive and administrative metadata for each item. This metadata was then entered into a MS Access database upon scanning. Technical metadata was embedded in the TIFF header during digitization. Batched forms were transferred to the catalogers after the access and thumbnail jpeg's had been saved to the server.

To maintain quality assurance during digitization, each scanner was calibrated twice a month and each monitor, twice a day. Quality control for the first thirty scans consisted of checking each master TIFF displayed on one of the monitors in the digitization lab against the original photograph. After the first thirty scans, every 10th scan was checked against the original. All scanned files were opened to ensure full functionality. The reference jpegs and thumbnails were spot checked on various workstations and opened in different browsers and evaluated for appearance.

The Free Library of Philadelphia received funding for the Centennial Exhibition Digital Collection (CEDC) in the form of a one-year grant from the Institute for Museum and Library Services. The funding was specifically to provide access through cataloguing, digitization, and presentation on the World Wide Web of more than 1200 rare silver albumen photographs and related original materials documenting the 1876 Centennial Exhibition in Philadelphia.

Requests for reproductions should be directed to Reproduction Services.

The Free Library of Philadelphia provides the information contained on this website, including reproductions of certain items from its Collections, for personal or research use only. Any other use, including but not limited to commercial or scholarly reproductions, redistribution, publication or transmission, whether by electronic means or otherwise, without written permission of the Library is strictly prohibited. Permissions are determined by the Library on a case by case basis, and a usage fee may be required depending on the type of proposed use.

This site consists of digitized images related to the 1876 Centennial Exhibition in Philadelphia. Content related to the Centennial Exhibition was produced by subject specialists on staff at the Free Library. Free Library staff also developed searches and tours that create access to and views of the database and the content. Tango, a middleware product and Javascript were used to create searches and tours. The site is mounted on an NT server.

Work of creating the site was divided among Project Team members. The team included: