Partway to Freedom at the Free Library

How many Philadelphians can trace their roots back to Civil War soldiers? Local composer and librettist Dr. Cynthia Cozette Lee can, and this history inspired her and her sister, Dr. Hazel Lee, to craft a modern opera based on this legacy. And, working with librarians from Parkway Central's Music Department, they presented excerpts from this exciting new opera, Partway to Freedom last month to a small but devoted crowd who braved blizzard conditions to make it out.

Partway to Freedom tells the story of a slave escaping to a Northern city and joining the United States Colored Troops (USTC). The work was written in memory of Dr. Lee's Grandfather, a sergeant in the 4th Regiment Infantry of the USCT.

After they saw the opera, one audience member commented that they didn't realize the Opera as a genre was still capable of producing relevant and modern works today. Partway to Freedom proved that opera's still a fertile form in which Philadelphian musicians can innovate. Here in the Music Department, we know that first-hand: local opera singers depend on our collections of arias,books about opera, and opera songbooks - as well as Music Librarian's expertise - as they try to make it as the next Lanza or Anderson. Local opera luminaries of today utilize the Music Department too - we can’t tell you who though!

After the rousing arias, the United States Colored Troops reenactors led by Mr. Robert El and Company treated the audience to a roundtable discussion about African American participation in the Civil War. Dr. Lee also referenced the Music Department's historic Sheet Music Collection, including talking about our priceless treasury of Civil War Sheet Music. The Free Library and its resources will be here to serve the community of scholars, musicians, researchers, and fans of music until the next War breaks out. Visit us today!

You can read more coverage from the performance, and the press release, in The Scoop (page 9) from the Philadelphia Free Press, as well as check out the Music Department’s continuing series of jazz concerts with the Philadelphia Jazz Project. 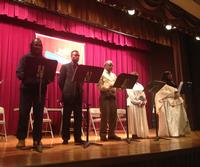 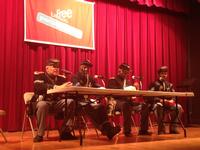 The Civil War Reenactors (Thom Davis, Albert El, Joe Becton, Robert Houston)
3 Comments | Add a Comment
Will Partway to Freedom be performed again? If yes, when and where.
Ollie Starks - Philadelphia
Hi Ollie, we're not certain when the next performance will be, but we wrote you back with information on how to contact Dr. Lee when you first e-mailed about this. We'll go ahead and send the e-mail again. We're glad you're interested!
Perry - FLP
4-3-15 Dear Ollie and Perry: Thank you for your continued interest in my Civil War opera Partway To Freedom inspired by the life experience of my great-grandfather Warren Garner who served in the 4th Regiment of the United States Colored Troops (U.S.C.T.) The vibrant performance of the singers and powerful lyrics written by my co-librettist sister Dr. Hazel Lee certainly made the performance a great success. In addition, the roundtable discussion involving the Civil War Reenactors of the 4th Regiment provided wonderful historical information. I will contact the Free Library Music Department as soon as I have a date for another performance. Sincerely, Dr. Cynthia Cozette Lee,Composer/Librettist
Dr. Cynthia Lee/composer - Philadelphia, PA