Juneteenth is a celebration of emancipation from slavery in Texas on June 19, 1865. This year marks the 150th anniversary. Some non-fiction children’s books that explain this holiday include Juneteenth by Vaunda Micheaux Nelson and Drew Nelson. This book, which reads like a selection of poems, introduces slavery and the emancipation from it in simple-to-understand language. It’s a great read for children in K-2nd grade. Another non-fiction book, which is part of a series called Finding Out About Holidays, is Juneteenth: A Day to Celebrate Freedom From Slavery by Angela Leeper. This book is broken down into chapters explaining the history of slavery, the history of Juneteenth, and information about ways people celebrate. This book is includes some photographs and illustrations from the late 1800s, photographs of Juneteenth celebrations, and even a craft idea.

There are also some great picture books geared toward younger children, including a beautifully illustrated book by Angela Johnson titled All Different Now: Juneteenth, the First Day of Freedom. E.B. Lewis captures the life a little girl in the midst of emancipation with images of slavery and freedom. Johnson includes a timeline of the history leading up to Juneteenth.  Another picture book that captures this moment in history is Juneteenth for Mazie by Floyd Cooper. In this book we have Mazie getting ready to celebrate Juneteenth with her family.  We remember back with her to her ancestors who were slaves and eventually freed. This picture book shows just one way a family can celebrate this holiday.

There are many other books available celebrating Juneteenth for children, including: 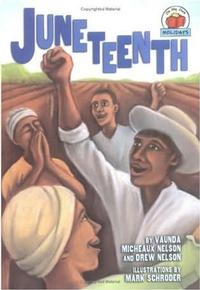 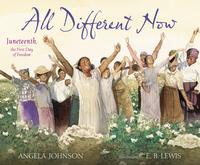