I met Mary Tyler Moore on the TV in my family’s basement somewhere in the late 1980s or early ‘90s, as I poured through repeats of her eponymous sitcom just as fast as Nick at Nite could air them. Within no time, I found myself wishing—desperately—that I could somehow burst through the tube and assume Mary Richard’s life when I hit the oh-so-far-away age of 30.

As The Mary Tyler Moore Show opens, Mary finds herself making a fresh start in Minneapolis after ditching a bad boyfriend, juggling an unexpected career at a local TV station, and making her way into the hearts of her neighbors and colleagues with her unquenchable spunk and upbeat attitude. Throughout its seven year run, from 1970 to 1977, The Mary Tyler Moore Show focused on matters ranging from bad hair days and worse dinner parties to the freedom of the press and pay equity. But at the end of the day, the show wasn’t really about one particular issue or relationship; it was really about a modern single woman finding her way in a rapidly changing world, just trying to "make it after all" … and finding herself in very, very funny situations along the way.

As I grew, Mary and her pals got me through grad school, break ups, career switches, and just plain old lousy days. As the decades passed, her positive outlook and can-do spirit never got old. This fall, I ventured to Minneapolis to see her "house" in person, and toss my hat up in the air alongside the statue dedicated to her on Nicolette Mall.

I was saddened yesterday to hear of Mary Tyler Moore’s passing, as a number of Free Library colleagues popped in my office to make sure I’d heard the news. My cell phone chirped as friends near and far checked in, too. I started to get weepy, and then had to stop and look around. Here I am with a fun job in a great city, lots of zany colleagues (sorry, guys, but it’s true!), and fabulous friends and family. I’ve even had my fair share of bad hair days—and then some. Maybe, I thought, I hadn’t hit so far off my youthful Mary Richards target.

So with that, I’ll toss my beret once more to the woman who let a generation of us dream that living a life like this was possible.

The Free Library has a wide collection of materials featuring Mary Tyler Moore, including DVDs of The Mary Tyler Moore Show and The Dick Van Dyke Show; books on her history-making characters; and memoirs written by Mary herself. Pick one up and say hello to someone who could really turn the world on with her smile. 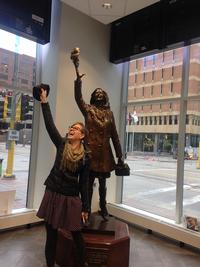 Mary Tyler Moore (statue) and me at Nicolette MallMinneapolis, MN
Add a Comment