Philadelphia is a city of neighborhoods and Olney is a neighborhood of cultures. Today Olney is the most diverse of Philadelphia’s neighborhoods and its 5th Street business corridor serves recent immigrants from Korea, Cambodia, Vietnam, Puerto Rico, Colombia, Mexico, Jamaica, Haiti, and West Africa alongside the African-Americans, Ukrainians, Irish, and Germans who have been here for generations. But Olney was originally a much simpler place...

In the beginning, Philadelphia was only 2 square miles and the area that is now Olney, about 7 miles to the north, was wilderness. Immigrants carved out farms to serve the needs of the growing city. As the city became more populated, many wealthy residents built country homes in the areas around the city to escape the heat and fevers of summer. In 1840, Alexander Wilson built his estate near Tacony Creek at what is now Olney Avenue and Westford Street, just east of Rising Sun. Wilson was an admirer of William Cowper (pronounced "Cooper"), a British poet who lived in Olney, England, and he named his estate Olney, which became the name of the neighborhood. Cowper is most famous for The Olney Hymns, a collection of over 300 hymns written by Cowper and his good friend, John Newton. The collection, published in 1779, includes Amazing Grace, written by Newton after Cowper succumbed to the depression that ended his creative career.

With the Act of Consolidation in 1854, the city went from 2 square miles to almost 130 and Olney became part of Philadelphia proper. It remained a quiet, rural area until the 20th century. At that time, industry began to move north and by the 1920's, large factories such as Heintz Manufacturing and Brown Instrument were attracting workers to the area. Many of the German and Irish immigrants who had come to work in the factories of Frankford, Port Richmond, and Kensington moved north in search of space and clean air.  New schools, a branch library, a thriving business district, and Fisher Park, donated to the city by Joseph Wharton, attracted more residents.

In the 1960s, factories began to close and the skilled workers of Olney left to find other jobs. The resulting drop in housing prices became an opportunity for others to move in and build the vibrant community we see today. 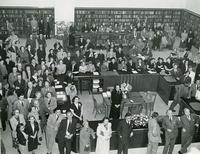 Olney High School
5 Comments | Add a Comment
Had the best time growing up in olney ,geneva and westford.
David Costa - Olney philly pa
Good article. Yes, Olney is very diverse. This article talks about Olney Transportation Center, however that is not in Olney. Its only on Olney Ave. Your olney map does not include broad street and neither do the maps i have seen. Olney transportation is in Logan and on the border of the Fernrock and Ogontz sections of the city.
Daf - Northwest Philadelphia
Thanks, Daf! You are right - Olney transportation Center is not in Olney, but its proximity was one of the factors in the growth of Olney as well as Logan, Fern rock and Ogontz.
SallyF. - Philadelphia
A Neighborhood I once live near by.
david baarbour - Philadelphia, PA
Rising Sun and Ashdale was part of a Park when my mom was little. She used to play there. It had a creek running through it. That was in the 20s/30s. We lived on Ashdale through the 60s. The now underground creek cracked our foundation and at times the city would have to fix the street where it would buckle.
Barbara Smith Willard - From Olney