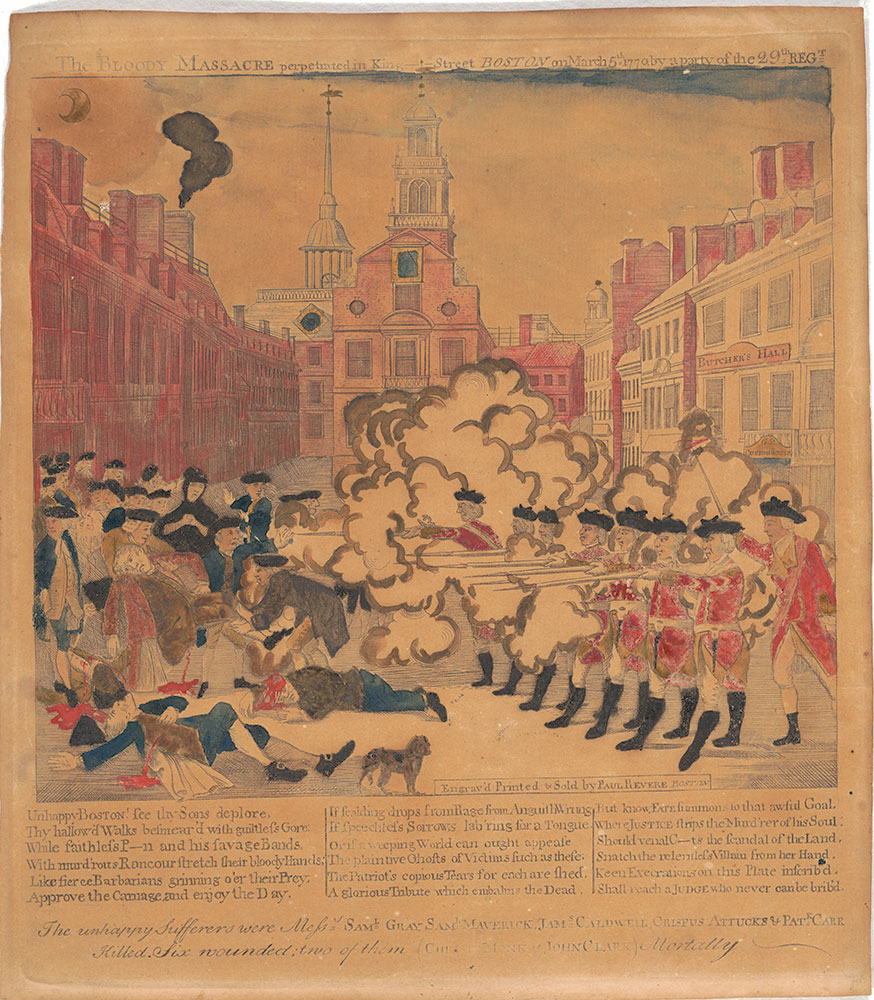 The Bloody Massacre  is considered the most famous and desirable of all of Paul Revere’s engravings as it commemorates one of the most important events leading up to the American Revolution.  On March 5, 1770, a belligerent mob of angry Bostonians confronted British Soldiers in protest of a series of unfair tax legislation levied upon them by the British. British soldiers responded by firing into the crowd of protestors, killing five people. Revere’s depiction of the event was meant to incite anger among colonists and to garner support for the patriotic cause.  His image shows British soldiers ordered to shoot into a defenseless crowd of unarmed civilians.  This provocative image is supported by incendiary text below that condemns the British for massacring innocent civilians with a detailed account of the scenes above. Among those listed as killed is Crispus Attuck, a Native American of African descent who was later championed by the Abolitionist movement for his heroic role in the American Revolution.

The popularity of Revere’s Bloody Massacre may be attributed to its wide circulation, many of which have survived. The importance attributed to this print in its time is evidenced by the fact that Bostonians paid eight pence to have them colored and many of them were ordered with the print already framed. It is estimated that about half of the impressions that survive are either in their original frames, or in frames of the period.

Revere’s engraving is regarded as a milestone in American pictorial journalism as it was published and circulated only three weeks after the incident took place. It is believed that Revere managed to do this by basing his engraving on a painting that his friend, Henry Pelham(1749-1806), sent to Revere for him to review The painting was titled,  Fruits of Arbitrary Power, and  depicted the horror of the Boston Massacre. It is believed that Revere copied Pelham’s design and sold it a week before Pelham engraved and published his. Revere’s modified version includes “Butcher’s Hall” in the background to the right above the British soldiers to accentuate the brutality of the British in butchering innocent civilians.

Beneath the image the text reads:  Unhappy Boston! See thy Sons deplore. Thy hallow’d Walks besmear’d with guiltless Gore. While faithless P-n and his savage Bands. With murd’rous Rancour stretch their bloody Hands; Like fierce Barbarians grinning o’er their Prey, Approve the Carnage and enjoy the Day. If scalding drops from Rage from Anguish Wrung if Speechless Sorrows lab’ring for a Tongue, or if a weeping World can ought appease The plaintive Ghosts of Victims such s these; The Patriot’s copious Tears for each are shed, a Glorious Tribute which embalms the Dead. But know Fate summons to that awful Goal, Where justice strips the Murd’rer of his Soul; Should venal C-ts the scandal of the Land, Snatch the relentless Villain from her Hand, Keen Execrations on this Plate inscrib’d Shall reach a Judge who never can be brib’d.” Beneath is scripted engraved text which reads “The unhappy Suffers were Mess s Sam L Gray, Sam L Maverick, Jam S Caldwell, Crispus Attucks, & Patk Carr. Killed Six. wounded: two of them (Christ R Monk & John Clark) Mortally.” Above the image is the formal title “The Bloody Massacre perpetrated in King—Street Boston on March 5th 1770 by a party of the 29th Regt.”

Paul Revere made his living as an engraver and silversmith. He was also a member of the Sons of Liberty, a militant organization that fought for the rights of Americans and against the abuses of the British government Revere was particularly resourceful in adapting the engravings of other artists for his own use. This allowed him to report on events soon after they occurred, which enabled him to sell more prints and to advance the call for American independence among colonialists at the same time.

Henry Pelham (1749-1806) was the son of Peter Pelham and his second wife, Mary Singleton Copley, which made him the half-brother of John Singleton Copley (1738-1815). He was a Massachusetts engraver and painter, and creator of Fruits of Arbitrary Power, the design from which Revere engraved The  Bloody Massacre.  On March 29, 1770 Pelham wrote to Revere a scathing letter which read as follows:

When I heard that you was cutting a plate of the late Murder, I though it impossible as I knew you was not capable of doing it unless you copied it from mine and as I thought I had entrusted you it in the hands of a person who had more regard to the dictates of Honour and Justice than to take the undue advantage you have done of the confidence and Trust I reposed in you. But I find I was mistaken and after being the great Trouble and Expense of making a design paying for paper, printing &c. find myself in the most ungenerous Manner deprived not only of any proposed Advantage but even of the expense I have been at, as truly as if you had plundered me on the highway. If you are insensible of the Dishonour you have to reflect upon and consider of one of the most dishonorable Actions you could well be guilty of.
H. Pelham.

"J.Whatman" watermark appears on right edge. There are two known states for this engraving. The Free Library's copy is the second state as identified by the hands on the clock showing the time 10:20 which more accurately reflects the time at which the massacre took place. The first state, referred to as the "eight o'clock state" after the time shown on the clock, is the rarer of the two states and was corrected by Revere in order to be more accurate.