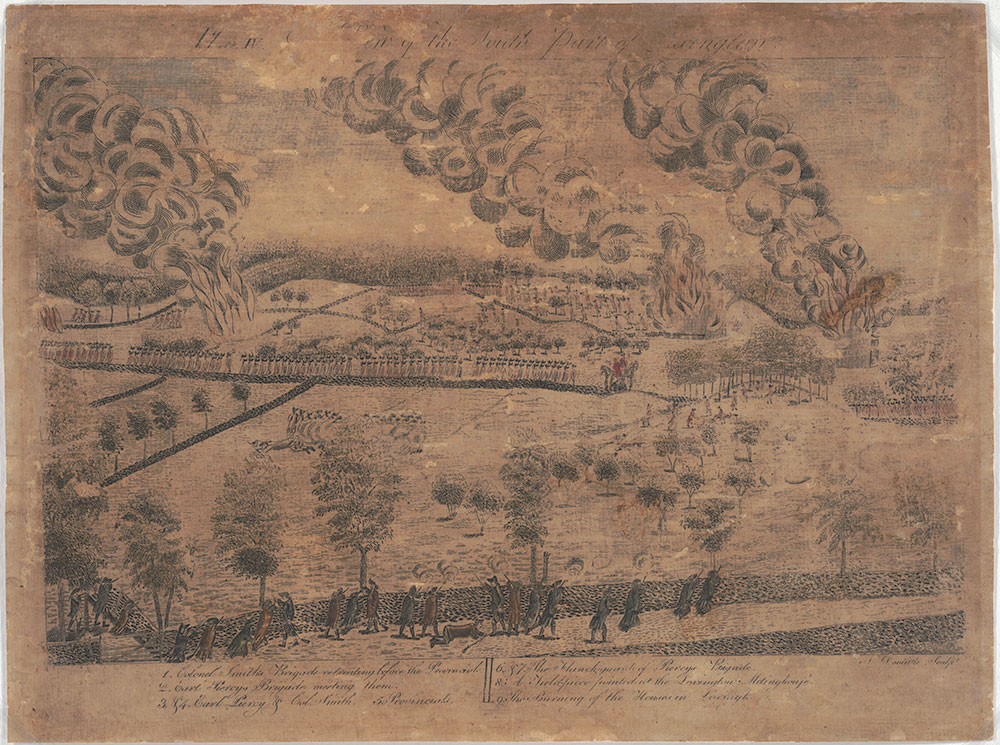 This print represents the fourth plate from a set of four plates engraved by Amos Doolittle, depicting the Battles of Lexington and Concord that began on April 19, 1775. It shows British troops under Lieutenant-Colonel Smith’s command retreating from Lexington to meet Lord Percy’s reinforcements from Boston. In the center is Percy and Smith meet on horseback while in the foreground minutemen are seen firing on the British troops from along a wall. The smoke and fire represent the burning of local dwellings in Lexington, which Percy commanded upon hearing that these dwellings were used as sniper nests.

The text Inscribed below the image reads:. A View of the South Part of Lexington │A. Doolittle Sculp│in two columns, 1. Colonel Smith’s Brigade retreating before the Provincials.│2. Earl Piercy’s Brigade meeting them. │ 3 &4 Early Piercy & Col.Smith, 5 Provincials│ 6 and 7. The Flank-guards of Piercy’s Brigade│8. A Fieldpiece pointed at the Lexington Meeting-house │ 9. The Burning of the Houses in Lexington

Amos Doolittle was an American engraver who learned to engrave in metal through his apprenticeship as a silversmith. He was one of American's first printers and a founding member of a New Haven militia company. He purportedly visited the sites of Lexington and Concord and interviewed participants of the battle shortly after its occurrence on April 19, 1775. The complete set of 4 plates of which the Free Library owns two -the second and fourth- are considered to be the only contemporary visual accounts of the Battle of Lexington and Concord by an American artist.