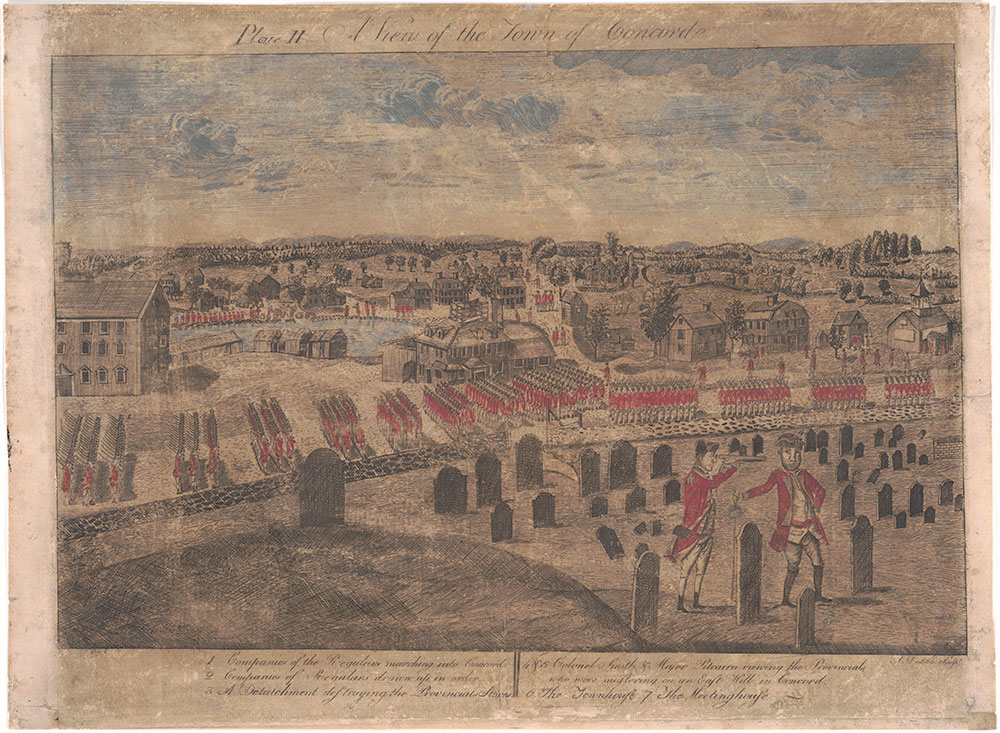 The Battles of Lexington and Concord (April 19, 1775) mark the beginning of the American Revolutionary War. After the British confronted American Militiamen in Lexington several hundred British troops continued their march into the town of Concord in order to destroy colonial weapon supplies. Since the colonists had been forewarned of their arrival most of the weapons were already removed or hidden.

This is the second of four plates engraved by Amos Doolittle that depict the Battles of Lexington and Concord. Major Pitcairn and Lieutenant-Colonel Smith are shown standing in a Concord cemetery watching over gathering forces of the colonial militia.

Amos Doolittle was an American engraver who learned to engrave in metal through his apprenticeship as a silversmith. He was one of American's first printers and a founding member of a New Haven militia company. He is said to have visited the sites of Lexington and Concord shortly after its occurrence on April 19, 1775. The engraved plates follow the drawings, which were based on eye witness accounts of the battle. The complete set of 4 plates of which the Free Library owns two -the second and fourth- are considered to be the only contemporary visual accounts of the Battle of Lexington and Concord by an American artist.

The text Inscribed below the image reads:. A View of the Town of Concord │A. Doolittle Sculp│in two columns, 1. Companies of the Regulars marching into Concord.│2. Companies of Regulars drawn up in order. │ 3. A Detachment destroying the Provincials Stores. │ 4 and 5. Colonel Smith and Major Pitcairn viewing the Provincials │who were mustering on an East Hill in Concord. │ 6. The Townhouse. 7. The Meeting house