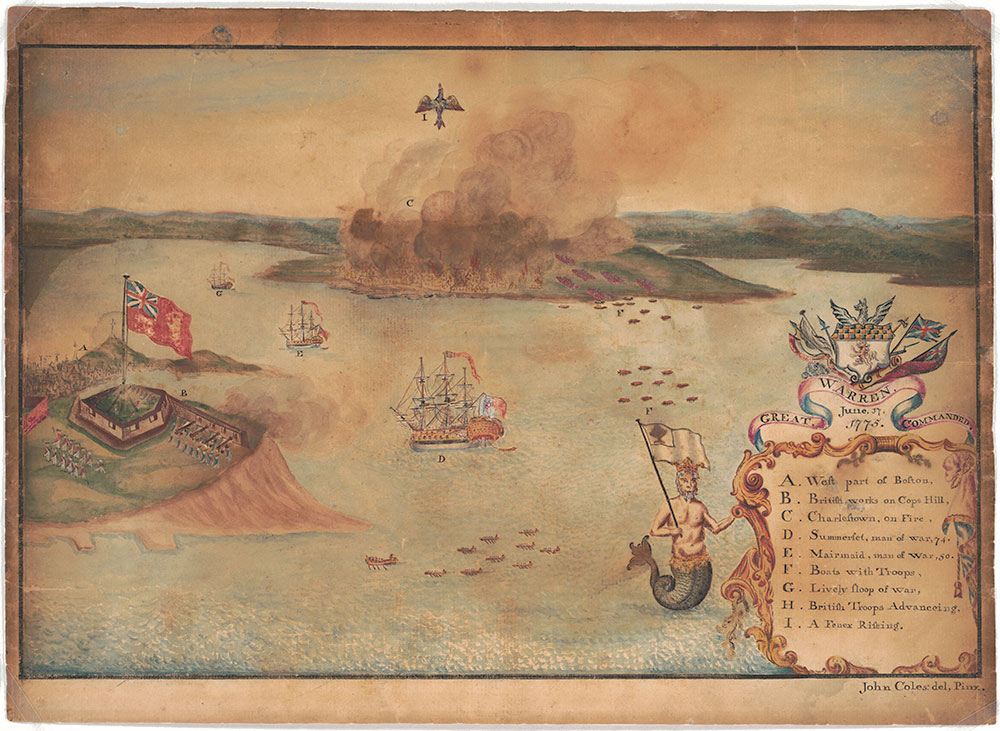 The title of this engraving commemorates Joseph Warren’s heroic role in the Battle at Bunker Hill. The visual representations show the British army attacking Charlestown, a town that lay defenseless and barely protected by the newly formed Continental Army. During the battle, the Continental Army held off the British troops longer than expected even though they were outnumbered and had run out of supplies. The British eventually captured Bunker Hill but at a high price: over 1000 British soldiers died or sustained wounds compared to 400 Americans killed or wounded.

Warren was a Harvard trained physician and active leader in the events leading up to the Revolution. Although he was recently commissioned a Major-General, Warren chose to fight as a solider instead of assuming command in the Battle of Bunker Hill. Warren was shot dead on June 17, 1775 by a British soldier atop Breed's Hill in the Charlestown peninsula in the battle more commonly known as the Battle at Bunker Hill.

In a cartouche on the lower right are nine lettered references which read: "A. West part of Boston B.British works on Cops Hill .C.Charlestown, of fire. D. Sommerset, man of war..E. Mairmaid, man of war .F.Boats with Troops. G. Lively sloop of war. H. British Troops of Advancing."  Prominently figured in the middle background is Charlestown on fire surrounded by a number of British ships and a fortified British garrison in the town of Boston on the bottom left foreground. On the bottom right next to the cartouche is a half-naked and bearded merman wearing a crown and holding a flag with the emblem of a tree, perhaps the artist’s attempt at condemning Britain’s role in this battle. The “Mairmaid“was a British man of war, one of the war ships illustrated in the engraving (item E).