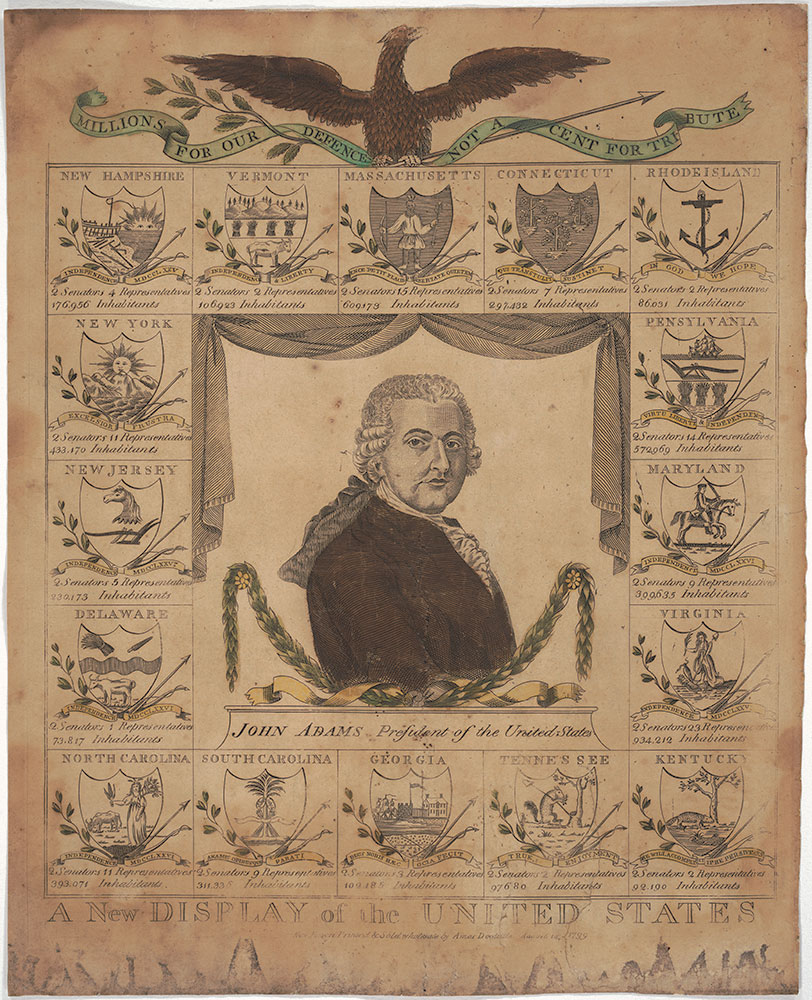 Three years after the inauguration of John Adams as the second president of the United States in 1796, Amos Doolittle published A New Display of the United States. This was Doolittle’s reworking of an earlier version of a plate commemorating George Washington as the first president of the United States.   Adams did not have Washington’s celebrity status but Doolittle capitalized on Adams’ recent rise in popularity among Americans due to the public’s support of his administration’s handling of the “XYZ Affair.” In 1797, while Britain and France were at war America sought neutrality and attempted a peace treaty with France. A diplomatic scandal erupted when three French diplomats (hence the term “X, Y, Z”) demanded bribes and that a loan be made to France as pre-conditions for negotiating a settlement. The engraved image of an eagle with an olive branch and spear with the  inscription on the ribbon below which reads, Millions for our Defence Not a Cent for Tribute, underscores America’s rejection of these preconditions, and its willingness to make peace with and defend itself against France.

Doolittle engraving of Adams was a copy James Smither’s (?-1797) engraving of Adams that he found in a frontispiece of a book titled A defence of the Constitution of Government of the United States of America. Smither’s engraving was modeled on John Singleton Copley original portrait of Adams.

Framing the  three-quarter view, bust-length view of Adams with drapery above and garland below, are 16 coats of arms, representing the 16 states that were part of the union at the time, including Vermont, Kentucky and Tennessee.  Population statistics and the number of senators and representatives for each state are inscribed below each coat of arms.

Amos Doolittle was an American born engraver who learned to engrave in metal through his apprenticeship as a silversmith and Jeweler. He was one of American's first printers and a soldier in the Revolutionary army. Doolittle engraved bookplates, historical events and biblical illustrations.